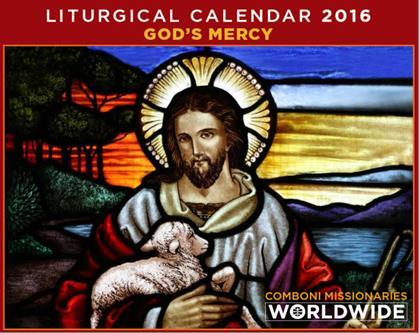 Wednesday, March 16, 2016
Since 1989 the Province of South Africa (RSA) is publishing a bimonthly magazine, Worldwide. We are celebrating the 25th anniversary of its birth (October/November 1989). Later on, a liturgical and missionary calendar was also published by the Comboni Missionaries, which is now very much appreciated and spread in the whole country. Through the years various efforts were made to promote the magazine and of the calendar. However, it is during the last 5 years that the province of RSA decided to invest more in the work of Mission Promotion, making available a confrere full time for Mission Promotion, creating a Missionary Centre in Pretoria, and improving the quality of the magazine and other publications.

Helping the Church
to become missionary

At present, the Province of South Africa prints every two months:

At the level of APDESAM, the province of RSA collaborated in the publication of these two booklets:

The RSA province is committed to help the Catholic Church to become more missionary. The above mentioned publications and the organization of the Comboni friends group in the different places where we work are powerful means to achieve this goal.

Pontifical Missionary Societies: Last Year 2014, the Episcopal conference asked a Comboni missionary to take over the direction of the PMS. Fr Gordon Rees was appointed as National Director for a period of 5 years.

Although we are finding many difficulties to carry out this endeavour we firmly believe that this is a meaningful work of the Province in the context of a Church too much inward looking.