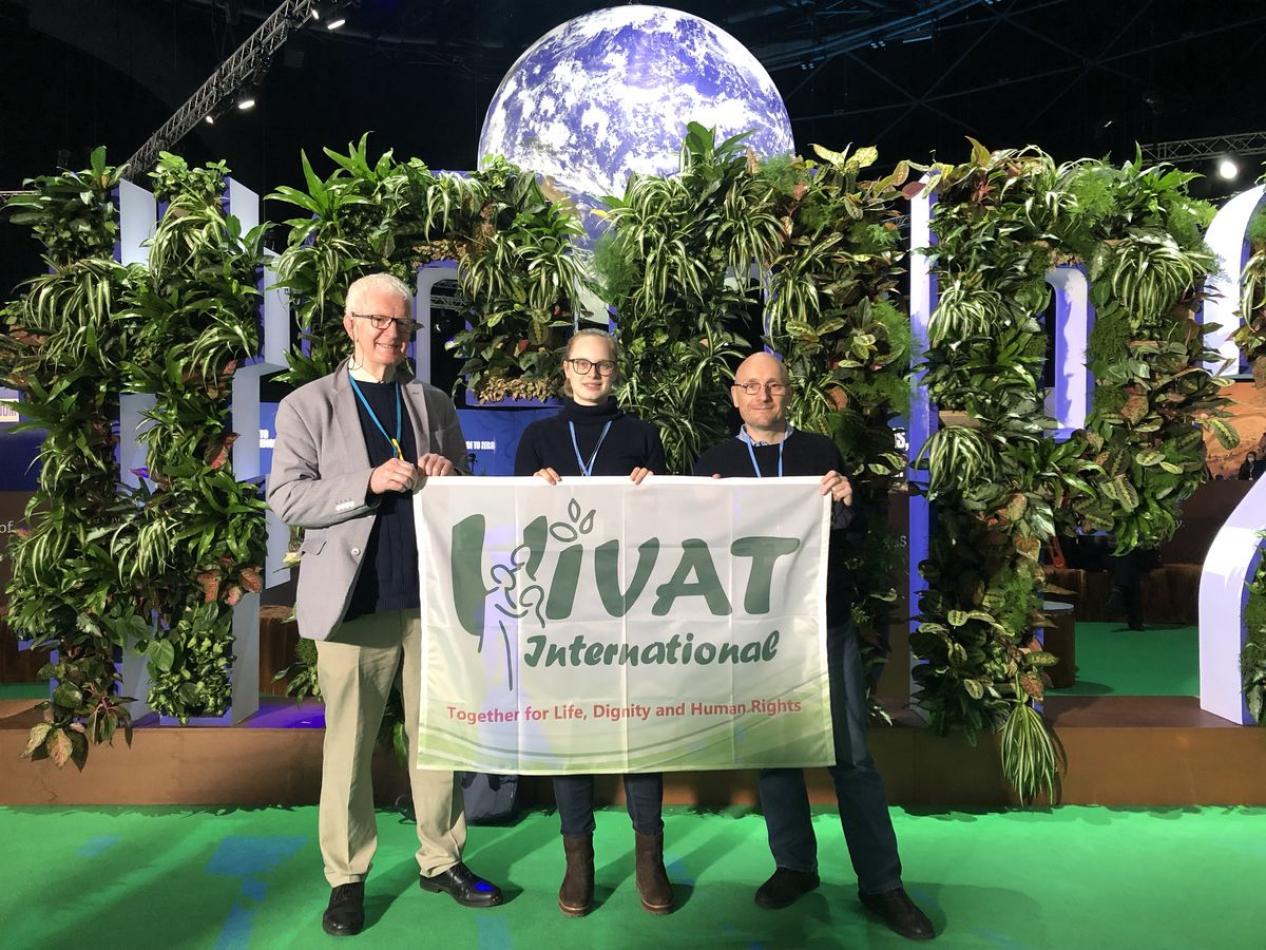 Wednesday, December 1, 2021
For the first time, VIVAT International participated in the event of a Conference of Parties to the climate agreements (Rio, Kyoto, Paris). It has been a terrific learning experience for the team that represented VIVAT (Fr. Liam Dunne, Sr. Ida Haurend, and Bro. Alberto Parise) at COP26 from October 31 to November 13, 2021, in Glasgow. The following are five takeaways from this experience in Glasgow.

1. Multilateralism and the need to belong

The dynamics of participation at COP are based on multilateralism: both Parties and CSOs are called to operate through groupings, for obvious reasons (time, elaboration of common positions, practicability of negotiations).

Especially in Glasgow, where there was a strict limitation of access to halls due to COVID restrictions, belonging to an NGO Constituency was essential, because the 9 Constituencies of civil society were, for example, granted 2 or 3 tickets for each negotiation room. Then, in the daily meetings of the Constituencies, there was supposedly the opportunity of knowing what was going on and discern how to respond to that. Unfortunately, that did not work for us. The ENGO Constituency was precluded to us because VIVAT International is not a member of Climate Action Network (CAN). Maybe VIVAT could consider joining the network. In fact, participation into the COP is a continuous exercise and that takes place through networking and collaboration with the Constituencies.

In Glasgow, we were able to make contact with the FBOs group, which is not yet a Constituency in itself, but a group recognized by the Presidency. By the way, in the final document that the group submitted to the Presidency, they have asked to be further recognized as a Constituency. The group conducts the so called Talanoa dialogues, which articulate an interfaith perspective on the themes of the COP: I would recommend that VIVAT links up and participate in the activities of this group.

As for the Catholic organizations, there was a contact among themselves, but basically they all went along their own way. We missed a convening initiative, to have the possibility of sharing experiences, concerns, insights and common interests. We noticed that no other Catholic organization apparently linked up with the FBOs group.

In Glasgow there were so many events running concurrently and we tried to participate in those that appeared most engaging from our perspective. I have realized, however, that – with the exception of a few thematic events organized by the Presidency and the Plenaries – at such events participants seem to come from just like minded organizations. In other words, they all seem to talk just to themselves. I am wondering whether that makes sense. The end result is the impression of having parallel worlds that do not meet nor dialogue. I think that the challenge is to build up dialogical space, where there is chance to encounter differences and constructively interact.

3. The pivotal role of the Presidency

The Presidency of COP has the responsibility to set the agenda, set up the conditions of participation, listening to all parties, making a synthesis of different positions and engaging in to bilateral and multilateral negotiations, proposing drafts for approval that strike a balance of different needs and wants.

The first week in Glasgow was very frustrating for all, lamenting unacceptable limitations to participation. However, from what I could observe, the Presidency was able to take into consideration some of the concerns and suggestions expressed by civil society. The challenge is that the process is based on diplomacy and it has to aim at consensus. Therefore, there may be inconsistencies in the outcomes, since Parties may have different or competing interests.

Civil society, at any rate, had a very important role in that it allowed the Presidency to include human rights concerns and climate justice into the cover decisions, which may have not be heeded without their pressures. Once again, Constituencies are very important and need to work closely with the Presidency in order to have their voice heard. On the other hand, the Presidency needs the pressure from CSOs to convince Parties to accept the inclusion of human rights and climate justice concerns.

4. The need to put pressure on national governments

The thrashing judgement on COP’s results, especially from the youth, is that it produces just empty words, or – as it has often been quoted in Glasgow – “bla bla bla”. Despite falling short of expectations, Governments have at least agreed on the implementation of a number of decisions. The challenge now is to keep on the pressure on them so that they may fully deliver. There are no sanctions nor international mechanisms to oblige Governments to actualize their commitments. But their citizens – at least in democratic countries – can hold them accountable. Therefore, this is where our JPIC ministry must make a difference. And again, this is not possible if we work alone; we need to participate in popular movements which share this very same agenda.

5. The key point is the development model

After coming back from Glasgow, I have been encountering many people asking me whether COP26 has been a success or a failure. If we listen to the evaluation of the Presidency of COP, we gather that the overarching goal of containing global warming within 1.5°C above pre-industrial levels is still alive, though the pulse is weak. This notwithstanding, they claim that there are some breakthroughs on which it is possible to build to accelerate the transition to Net-Zero GHG emissions in time. This perspective is based on a pragmatic outlook, which tries to maximize gains to accelerate the transition to Net-Zero, assuming the current economic and financial systems as the only option we have. That means harnessing all market forces, mobilizing private capitals, building on technological innovations to find solutions, and scale these up for impact.

However, there is also another narrative, namely, that the very system that has caused the climate crisis cannot be solution to the problem. And this is because it is a system that presupposes endless growth to sustain itself. Technological innovations, once there is an enabling environment and they become commercially viable, create excitement because they promise new markets and business opportunities, for example in the field of green energy. However, critics point out that generally these are false solutions, which simply shift the problem somewhere else, rather than solving it.

Therefore, we there is need for a more holistic perspective, one which is human rights and ecosystems based. Civil society is aware that we won’t solve the climate crisis unless we land onto  a different model or paradigm of development. This is the message that indigenous peoples, youth and women organizations, environmental organizations and FBOs among others are sharing and promoting in their advocacy work.