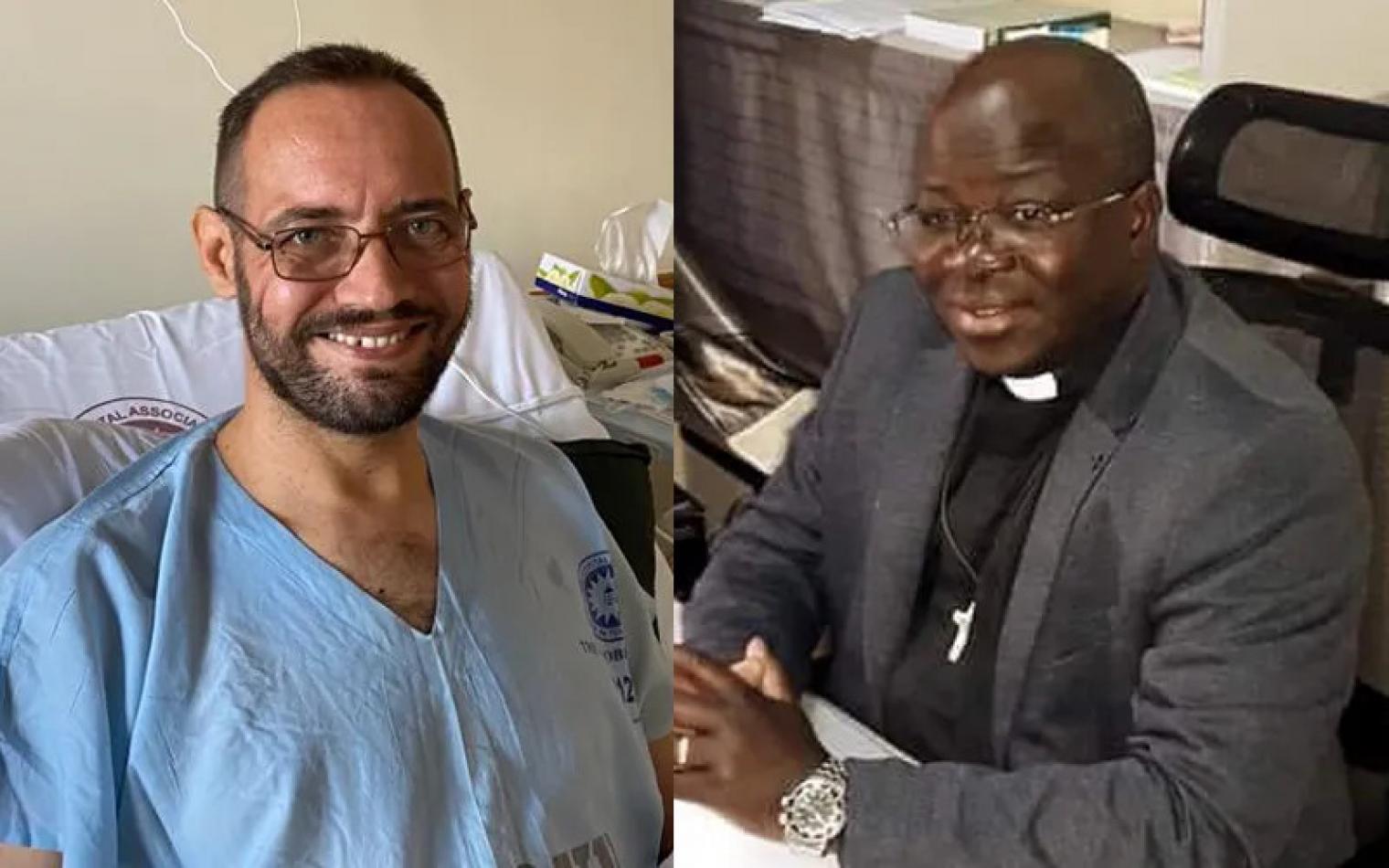 Thursday, May 6, 2021
Pope Francis has given the Bishop of South Sudan’s Wau Diocese, Bishop Matthew Remijio (right),  the mandate to “temporarily govern Rumbek Diocese” while the Bishop-elect of the South Sudanese Diocese, Msgr. Christian Carlassare (left), continues to recover from gunshot injuries.

The latest appointment by Pope Francis in the East-central African country was made public Wednesday, May 5 by the Vatican’s Chargé d’Affaires of the Apostolic Nunciature in South Sudan, Msgr. Mark Kadima. In his communiqué obtained by ACI Africa, Msgr. Kadima says that Bishop Matthew Remijio will govern the Diocese of Rumbek until Msgr. Carlassare “is healed (and) ordained” a Bishop.

“On behalf of the Apostolic Nuncio, I wish to announce to you that the Holy Father Pope Francis has appointed the Most Reverend Matthew Remijio, Bishop of Wau, as the Apostolic Administrator of Rumbek Diocese,” Msgr. Kadima says in the May 5 statement. He adds, “Bishop Remijio will temporarily govern Rumbek Diocese until the Bishop elect, the Most Reverend Christian Carlassare is healed, ordained and takes over the governance of that Diocese, hopefully as soon as possible.”

The Papal appointment of Bishop Remijio who continues to serve as the Local Ordinary of Wau Diocese “takes effect immediately,” Msgr. Kadima says in his one-page statement. The member of the Comboni Missionaries who turns 49 today, May 5, has been at the helm of Wau Diocese since January following his appointment last November. The South Sudanese Bishop was ordained a Priest in 2004. As the Local Ordinary of Wau, he succeeded Bishop Rudolf Deng who died in March 2017 at the age of 76.

Bishop Remijio will now have additional administrative duties in Rumbek Diocese until Msgr. Carlassare who was shot in both legs in the early hours of April 26 recovers and is ordained a Bishop. “I welcome, full of gratitude, the appointment of Rt. Rev. Matthew Remijio, Bishop of Wau, as the Apostolic Administrator of the Diocese of Rumbek for an interim period to allow my prompt healing and facilitate a positive solution of the violence that has occurred,” Msgr. Carlassare has told ACI Africa. He has added, “I am also grateful for the work on the ground led by Fr. Andrea Osman and his committee as they will collaborate and find in Bishop Remijio a valid counterpart.”

The Bishop-elect pledges to “accompany the process with my prayerful solidarity with the faith that God does not abandon his own children.”

Rumbek was elevated to a Diocese in 1974. The see became vacant in July 2011 following the sudden death of Bishop Cesare Mazzolari. The Comboni missionary Bishop collapsed during Mass on July 16, 2011, a week after South Sudan gained independence. When Msgr. Carlassare was named Bishop of Rumbek on March 8, he described his appointment as an illustration of “the God of surprises.”

In an ACI Africa video recording from his hospital bed at The Nairobi hospital a day after he was attacked, Msgr. Carlassare described the April 26 shooting experience as life-threatening and urged reconciliation and “justice with the same heart of God.”

“I take the chance to greet all of you, my brothers and sisters, in Rumbek. I want you to be at peace to know that I’m well here in the hospital in Nairobi,” Msgr. Carlassare said, and added that he was receiving good medical care, and that he was improving. “It will take some time for my legs to be able again to walk but I assure you that I will be back and I will be with you,” the Italian-born Cleric who has ministered in South Sudan’s Malakal Diocese since his arrival in South Sudan in 2005 said in his message to the people of God in Rumbek.

Msgr. Carlassare was appointed Bishop for Rumbek Diocese March 8. He traveled to Rumbek Diocese April 15 following days of spiritual retreat in South Sudan’s capital, Juba. His episcopal ordination had been scheduled to take place on Pentecost Sunday, May 23.

Msgr. Carlassare who will turn 44 in October has continued to express optimism about his recovery process. In the latest video recording by ACI Africa, he says that he is offering his pain for the purification of Rumbek Diocese. “I offer the pain I'm going through so that the Lord, our God, may purify the church of Rumbek from all errors and things like these may happen no more; no room for violence, division, (and) selfish desires that come from the devil,” Msgr. Carlassare says in the video recorded Monday, May 3. He adds, “Let me be a sign for all of you. As I will rise from this bed and walk again, let Rumbek also rise again, and walk the way of peace and unity.”
[Agnes Aineah – ACI Africa]