Oral Literature from Zambia: How the dogs came 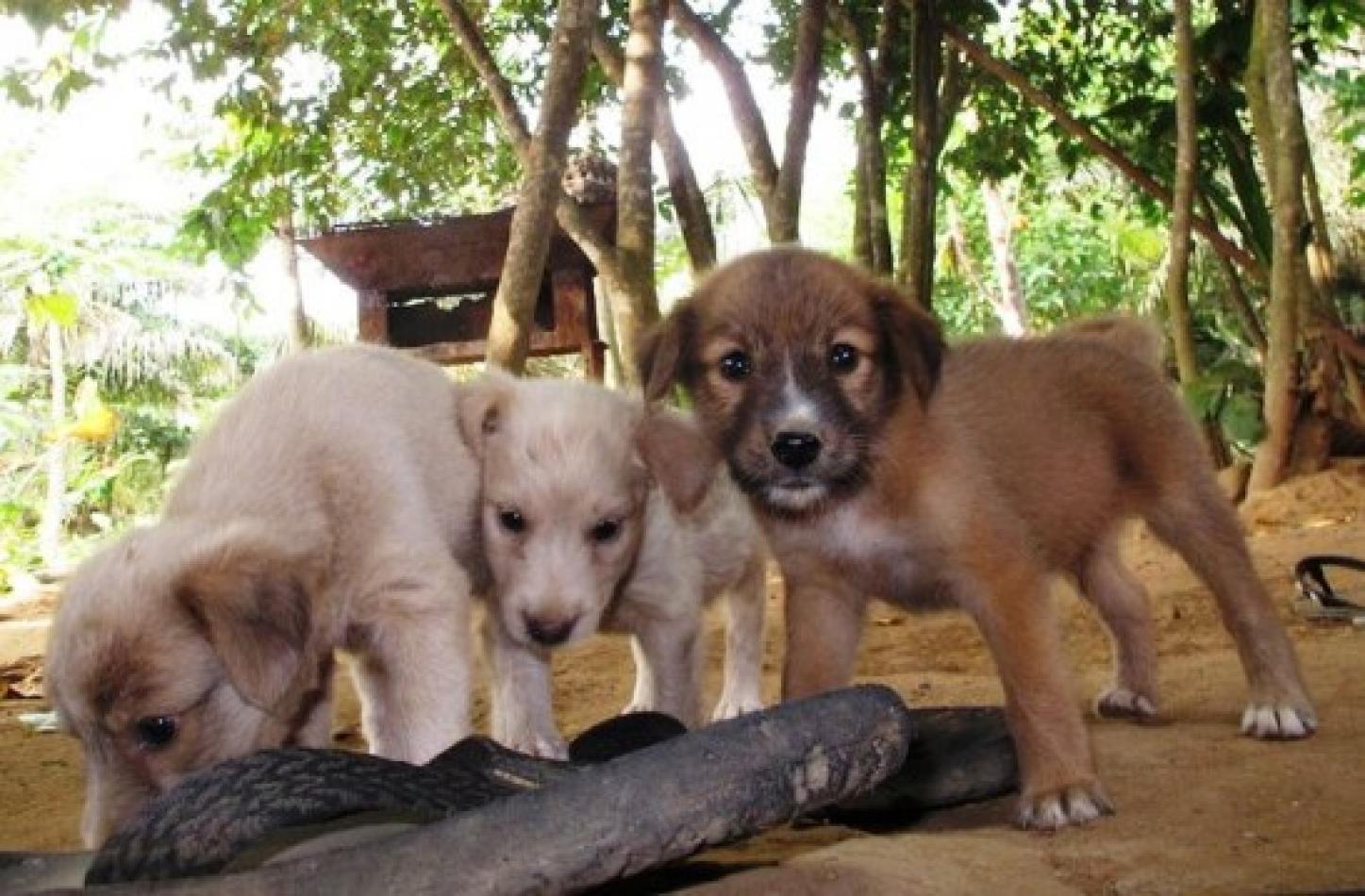 Friday, December 6, 2019
A long time ago there were no domestic animals, all were wild, and all were the enemy of man. They feared him, and he feared them, unless they were too small to do him any harm.

There were no dogs such as we know today, but creatures roamed the forest who were a mixture of wolf, hyena and jackal. These creatures were not friendly with any of the animals. They killed smaller, weaker beasts for food, and they ran and hid when large animals appeared. If an animal was wounded or dying, they attacked and ate him.

Sometimes when they roamed around, they watched man curiously. They saw that man had shelter and warmth, and that he hunted for his food, and didn’t hunt alone, but in groups. They both despised and envied him.

Now it came to pass that there was a great drought, and food was scarce, and the wild dogs had to hunt harder than they had ever hunted before. One day a mother left her litter while she sought for food. It so happened that a number of families were moving to a new district because of the drought, as people often do in Africa, for one reason or another.

They were resting from the heat of the day, and a very small boy wandered off by himself and came across the litter of puppies. They were very tiny, and the small boy was curious. He picked up one of the puppies, and decided he would keep it. So he wrapped it up in a bundle, and took it away. He was very anxious to own this strange little creature, but he was afraid his mother would not allow it, so he hid the puppy, and no one knew he had it until that night when they had gone much further on their journey. At supper time the little boy gave the puppy some of his own supper, and then the mother discovered the animal.

“What are you doing with that? – she asked -. You don’t have to hunt for your own food yet.”

“It’s not for food – said the little boy – . I want it to keep. “But who wants to keep an animal?” the mother asked – You’ll have to feed it and food is scarce.”

“I know – said the boy -. But I’ll give it some of mine. I have no brothers or sisters to share with.” Because the mother was fond of the child she argued no more, but let him keep the puppy. The puppy was very happy, because he had more food and was more comfortable than he had ever been before. He shared the boy’s meals, and slept beside him at night.

In the meanwhile the mother dog missed the puppy, and was very angry. Man was her enemy, and she could smell his scent round the litter, and she was sure her child had been taken away, and eaten, so she resolved to have her revenge, and set off to trail the robber.

She travelled for a long time before she caught up with the people, who had now settled in a new spot. She came to their village one afternoon when everyone was resting, and was amazed to see her son asleep under a tree in the arms of a child. She was about to attack the child when fortunately her son smelled her scent, and came gambolling over to her. With a soft snarl the mother picked him up by the scruff of the neck, and dragged him into the bush, where she set him down.

“At last I have found you, and rescued you, my poor child,” she panted.

“You haven’t rescued me – yapped the puppy -. I was very well looked after, and I was having a fine time. I live as well as man, and he lives much better than we do.”

“My poor, foolish child – said the mother -, don’t you know that man is our enemy.”

“I don’t believe it – said the puppy-. Everyone was very kind to me”.

“Be sensible – snapped the mother -. They were only fattening you up so they could kill, and eat you.”

“You don’t know what you are talking about -, said the mother -. I am very displeased with you. Come along home now, and don’t think of these foolish notions anymore.”

The puppy opened his mouth to protest, but she picked him up by the scruff of the neck again, which made it impossible for him to talk, and off she loped back to the litter. Days passed but the puppy didn’t feel happy. He missed the food, and he missed the little boy, and he was no longer a special person, he was just one of a litter, and he didn’t like it.

Days lengthened into weeks, and the puppy grew big, and strong, but still he didn’t forget the happy time he had spent with man. So one night he slipped away again, set his nose to the trail, and started back in search of the village. So eager was he to get there that he did something no wild animal ever does, but which dogs do to this day. He didn’t stop for food, or drink, or rest, so early next morning he arrived at the village, tired, and thirsty and hungry.

The little boy who had missed the puppy very much was playing by himself outside his house. Suddenly he heard yells from the people around, and looked up to see an animal streaking towards him. “ Run, run, you’ll be killed – shouted the villagers, but the next moment the animal had reached the little boy, and instead of attacking him, it jumped up, and licked him, wagging its tail frantically.

“It’s my pup – shrieked the little boy. – He’s come back!”. And he threw his arms round the creature’s neck, and hugged it. The villagers were amazed at this, for they were afraid of the puppy now that it had grown, but the little boy gave the animal water and food and then they curled up together and went to sleep.

Back in the bush the mother dog missed her son, and decided to follow him, and this time she brought the rest of the litter with her because they were big enough to walk. So they all put their noses on the trail of their brother, and away they went. The mother was so angry and anxious to get her son back that they also went steadily on, pausing for nothing until they reached the edge of the village.

There they saw their brother playing with the little boy. The boy was throwing a stick, and the puppy was fetching it back to him to throw again, and they were both enjoying the game.

“Oh look at your poor, foolish brother -, whined the mother -. Look at him playing tricks.”

The pups all looked, and the eldest said, “I don’t see that it’s so foolish, I think it’s fun.”

“It won’t be fun when he’s killed and eaten,” growled the mother.

Just then a man came in with a carcass which he proceeded to cut up, and as he cut he threw bits to the pup. “Just look at that – said his brother watching enviously -. It doesn’t look as if he’s going to be killed, and eaten!”

“Don’t be foolish -, cried the mother -. Hasn’t man always been our enemy.”

The mother was so annoyed she cuffed her son, and knocked him down.

“Don’t contradict your mother,” she snarled.

Just then the pup wandered away from the boy, and came towards his family. When he saw them he was delighted, and ran up to sniff them.

“Welcome, brothers – he yelped -. You must come, and meet my friends.”

“Don’t be ridiculous -, cried the mother -. Your brothers are not going to be foolish like you. Come on home at once.”

But the pup was too big to take orders now, and he refused. “I’m not going -, he told her -. Man is my friend, and I have a far better life than I had in the bush. I’m staying here.”

At this the anxious mother broke into a wild protest.

“All right – she cried -, but don’t dare to come back to us when man turns against you. Come, my children, let us go.” Now the others didn’t want to go, but they were afraid, so they followed their mother, leaving the pup behind.

The pup trotted back, and started to play again. He was sorry to lose his family, but he felt he really belonged to the boy who had brought him up. So he stayed in the village, and grew bigger, and soon he began to go out hunting with the men, and the boy came along too. When the dog killed an animal or a bird he brought it to the boy, because he knew he’d get a share.

When the pup grew into a big dog he was out one day when he met a young wild dog, and stopped to talk to her. By this time a good many wild dogs knew about their extraordinary brother who lived with man, so the young dog began to question him about it.

He told her of his life, and suggested that she should come to the village and see for herself. Afraid, but greatly daring, she went there with him. She was too shy and frightened to be friendly at first, but the dog shared his food with her, and she soon came every day. In the end she became the wife of the dog, and when she had puppies of her own the dog brought the boy to see them.

As soon as the puppies could walk they staggered after their father into the village. At first the mother was frightened, and took them back, one by one, by the scruff of the neck, but as soon as they got free they toddled off to the village once more, until in the end she had to let them be, and came and lived there herself.

Now these puppies in turn grew up, and became attached to owners, and went hunting. Strangers passing through the village marvelled at this, and they too began to take wild puppies from litters and bring them into the villages.

Gradually the puppies who grew up with man began to change their dispositions as well as their habits. They were friendly with their owners, and not with others. They hunted wild animals, or chased them if they came near the villages. In fact they began to change into the kind of dogs we know today. If they got lost they became very unhappy until they found their owners again.

As time passed these tame dogs changed in appearance also, and no longer resembled jackals or hyenas. Now every village, not only in Africa, but all over the world has its dogs.

But the wild dogs didn’t change, they remained the same. They are surly, evil tempered creatures, who don’t like other animals very much, and don’t like each other either.
(Folktale from Zambia)
Comboni Missionaries