Oral Literature: How the first river was made 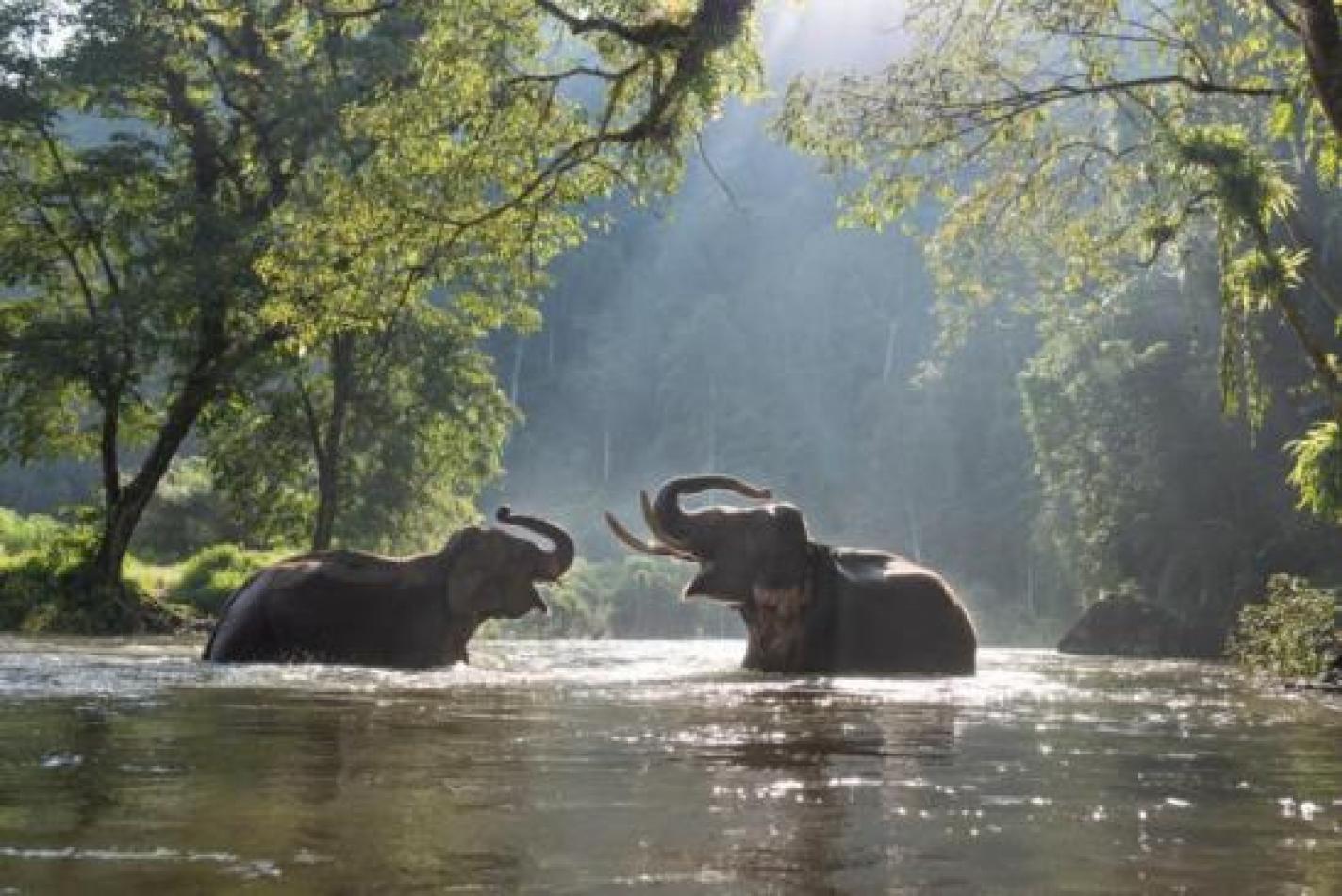 Wednesday, December 19, 2018
A long long time ago, when God made this earth, He chose the mighty elephant to be king of the world. The elephant and his subjects roamed through the dark green forests, and since there were no rivers in those days, God made a pond for them to drink from. Now one day the elephant trumpeted loudly, and called for his friends the hawk and the crab. “Tomorrow – he announced – I am going hunting in the forest, and you must come with me.”

The hawk was overjoyed and flew away to get his bow and arrows, but the poor crab was a slow-moving creature and could not hold any hunting weapons. But he was determined not to be left out, so he crawled away to his home and began to think hard about the problem.

The next morning all three creatures met on the edge of the forest, and while the hawk and the elephant went off with their bows and arrows to a section of the forest where they knew they would find plenty of game, the crab dragged a long net behind him, set it up in a spot he had chosen, and waited.

Presently a wounded animal rushed away from the elephant and the hawk, straight into the crab’s net, and seizing a large piece of wood the crab quickly beat the animal on its head, so that it died at once. This happened again and again. If the elephant or the hawk killed an animal outright, then they put it beside them for themselves, but if they only wounded one, the poor creature rushed away towards the crab’s net. Once it was entangled there, the crab soon dispatched it with his heavy stick, removed and hid the arrow that had wounded it, and put the carcass on his own pile.

By the afternoon, the elephant had killed five antelope and the hawk three, and each thought he had done very well. “Let’s go and find the crab – suggested the elephant – I don’t suppose the poor thing has managed to catch anything at all.”

How amazed they were to find the crab sitting proudly beside the carcasses of ten animals, all much bigger than himself. The hawk began congratulating him but the elephant was furious that the crab had killed more animals than he had, and shouted: “Hawk! Kill that wretched crab. I, your king, order you to do so. Cut off his head at once!”

“Oh, sir! Oh, king! – Begged the crab -. Please do not kill me. I will give you all this meat and never come near you again if only you will let me live.”

At last the elephant consented, and seizing the crab’s kill he bellowed: “Go! Go! And never let me see you again.”

“Good woman, – he croaked, – I have a message for you from our noble king, your husband. He says that the place where he has been hunting all day is very cold. You must make him some good soup with plenty of peppers in it to warm him up. Now don’t forget! Plenty of peppers,” he repeated, and he hurried away as fast as he could.

The elephant’s wife did as, she was told, and flavoured the soup very strongly with peppers. No sooner had she finished cooking it than the elephant and the hawk came home from their hunting trip. They were both extremely hungry and began to eat the soup straight away.

Meanwhile the cunning crab made his way to the pond and began to fill it up with earth. He worked so hard that at last there was no water left at all, and feeling very satisfied with his evening’s work, the crab dug a little hole in the middle of the place where the pond had been and I hid himself there. He had not long to wait. The hawk and the elephant finished up all the peppery soup and very naturally felt extremely thirsty. “Let’s go to the pond now, – suggested the elephant to his friend -. I’m so thirsty, I could drink it quite dry.”

Of course, when they reached the pond it was quite dry and the two animals were angry and perplexed. “What an extraordinary thing -, said the elephant – . You must help me dig until we get down to the water again.”

So the two animals dug and dug, getting thirstier and more irritable every moment. Suddenly the elephant reached the hole where the crab was hidden, and as soon as he saw the crab he knew that it was he who had filled up the pond with earth. “Ah ha! – He bellowed in a furious voice – . “It’s no good begging for mercy this time.” He seized the poor crab, cut off his head and threw him back into the mud.

Immediately the water started bubbling and gurgling up from below and soon the pond was nearly full again. The elephant and the hawk were delighted. They drank their fill and washed themselves, trumpeting and squawking with delight. They decided to leave the crab’s body in the pond, as that seemed to be the cause of the water flowing again, and as they stood at the edge watching the water still rising rapidly, the elephant commanded: “Dig an opening at the lower end of the pond, so that the water can run away. It’s beginning to overflow.”

The hawk did as he was told, and sure enough, the water began to trickle out of the pond so that very soon a little stream was flowing. It got wider and wider and deeper and deeper until it became a big river, still flowing downhill.

Now the crab was not really dead, and soon realised that he could escape from the pond by way of the river. But the poor thing had no eyes since his head had been cut off, so he went to the mud-fish to see if he could do anything for him. “I will do anything that I can – replied the kindly fish -, but I cannot give you any eyes. If you go to my friend the prawn, I think he could help you.”

Sure enough, the prawn could. He took some eyes and fastened them on to the crab’s shoulders, since he had no head on which to put them. The crab was delighted to be able to see again, hurrying down the river he left the pond, the elephant and the hawk far behind him. So now you know how the first river started, and the crab has no head.
(Folktale from Ekoi people – Cameroon)
Comboni Missionaries