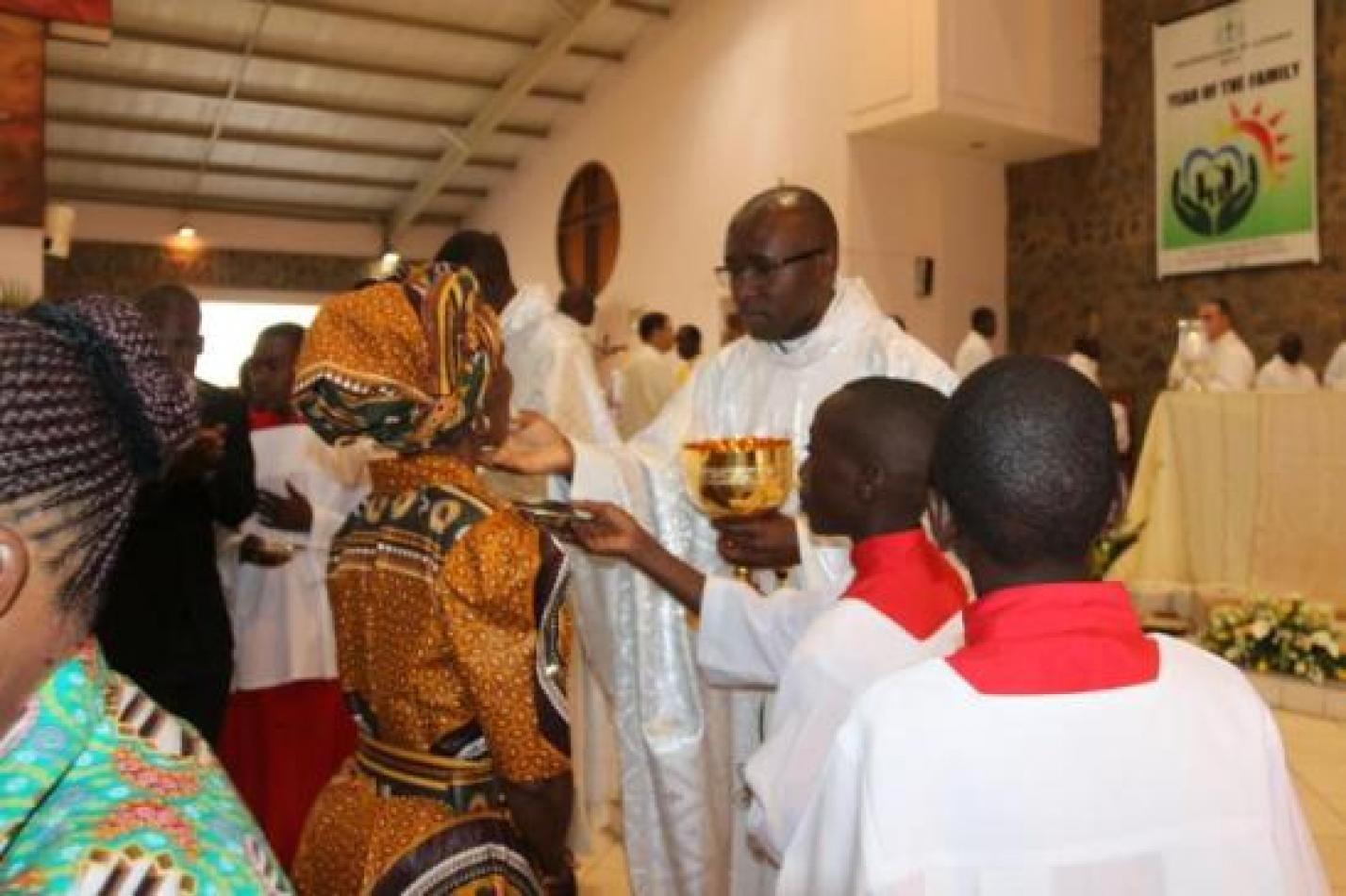 Tuesday, November 27, 2018
An altar boy accompanies the priests of his parish in their safaris to the outstations and enjoys every moment of that ministry. He begins to believe that it could be his path of life and makes up his mind: “I will be a Comboni missionary”. Today, as a priest, he would not change his life for all the gold of the world.

I was born in April 1984, in Kapiri Mposhi, a town in the middle of Zambia, next to the borders with the Copperbelt Province. From 1992 to 1999, I went through the seven years of primary education at Kapiri Mposhi Primary. After passing the grade 7 examination, I was called to Kabwe Secondary School, but my mum enrolled me at Kapiri Basic School (grades 8-9), because in 1997 my father had died and I was the only child still staying with her. Two years later, in 2001, my mother also died and I had to move to Lusaka and stay with my elder sister. For grade 10-12, I was sent to Mkushi High School, though my secret dream was to enter St Francis Malole Minor Seminary, in Kasama, the capital of the Northern Province of Zambia.

Why a seminary? I felt attracted to the idea of becoming a priest. I could not explain why, but when I imagined myself as a consecrated person or a missionary priest, I felt that it seemed right and fitting, though it made me afraid, thinking it would be impossible. Today, I can say that it was like a gradual falling in love.

The story had begun long before, when, still a very small boy, I had joined the group of the altar servers at the Immaculate Heart of Mary Parish, in Kapiri Mposhi. The parish was run by the Franciscan Friars. I would seize any opportunity to accompany them in their visits to the outstations, some very far from the centre. Going with them and serving at their masses in the various communities made me feel I was sharing their missionary apostolate. I could see the joy and consolation they brought to the people. I admired their capacity to feed them with the Word of God and explain it in a way that would enchant my heart. I loved all that very much, and there was a joy and excitement in me when I thought about it. Could it be the right path for me?

The idea kept coming back in my prayer, in my daydreaming, and in my imagination. Some Gospel passages and their sermons – about the calling of the disciples and their being sent out to preach and serve – seemed to stand out for me and to have a kind of clarity. It was as if a light had come on to warm my heart, and as if someone was pointing at me.

And so it was that, when I went to Mkushi High School – a boarding school quite far from any parish church – I immediately accepted to be one of the prayer leaders in the Sunday services for the Catholic students. And so, for three long years – maybe without being openly aware – I nurtured the childhood passion of serving the others.

I came to know the Comboni Missionaries through a friend – who is now a priest – after sharing to him my desire to become a priest. It was love at first sight. I read books and leaflets about their institute and soon I felt at home with the charism and the life of St Daniel Comboni, their founder. One day I came upon the booklet of their Rule of Life. One point struck me: “God’s call to missionary service became reality for Comboni in his choice of the peoples of Africa who, at that point in history, appeared to him to be the poorest and most abandoned of the universe”. As in a flash of light, I saw a ‘read thread’ that had been unfolding in my short life, joining its most significant moments. My safaris with the friars to the far away outstations, where the poorest and most abandoned Catholics lived, stood out among them. They had been the moments I had enjoyed most. That day, I decided I would be a Comboni Missionary.

In 2006, I entered the Comboni Postulancy in Balaka, Malawi, for three years of philosophy and religious studies. Leaving home and all that was familiar to me was not easy. Having to live in a new cultural environment was challenging, even puzzling, but also stimulating and enriching.

In 2009, I went back to Lusaka for the Novitiate, where I deepened my personal communion with Christ, while studying the theology of vows and deepening their bearing on the human-Christian growth for a greater availability for missionary service. At weekends, I would go out for pastoral work: during the first year, at the Lusaka University Teaching Hospital (UTH), visiting the sick and taking Holy Communion to them; during the second year, at St Kizito Parish, visiting families in Small Christian Communities, but more especially working with the youth groups.

In May 2011, I took my temporary vows. Soon after, the superiors sent me to the Comboni Scholasticate in São Paulo (Brazil) for the five-year-long theological studies at the Catholic University of that city. I enjoyed every single course. Yet, I did not limit myself to books and papers. I wanted also to deepen my missionary skills by spending all my holidays among the indigenous human groups of Brazil, in particular the indios Pankararú. I loved visiting them and studying their culture. They were – and still are – the most marginalised people in that immense country.

In December 2015, I came back to Zambia. In February 2016, I was assigned to Lirangwe Parish, Malawi, for my missionary service. In January 2017, I made my perpetual profession, one week before being ordained a deacon. In August, I became a priest, in Lusaka Cathedral, by the hands of the former Archbishop, Telesphore George Mpundu.

I hoped I would be sent to a faraway corner of the world. The superiors, however, assigned me to my own Comboni province (Malawi-Zambia). “Try to communicate to as many young people your passion for the last ones”, was the closing sentence of the appointment letter.

I met many challenges in my life. I managed to overcome them. Today I am happy to be what I am. God has been good to me. I have always felt his strengthening and encouraging presence close to me. I also met many simple and humble people who have inspired me. I have learned to put my life at the service of others and received life. Today I am convinced that losing my life for Christ leads to preservation through the struggles I face in the advancement of God’s Kingdom.
Fr. Malata Nsofwa Maximilian
In: Comboni Missionaries