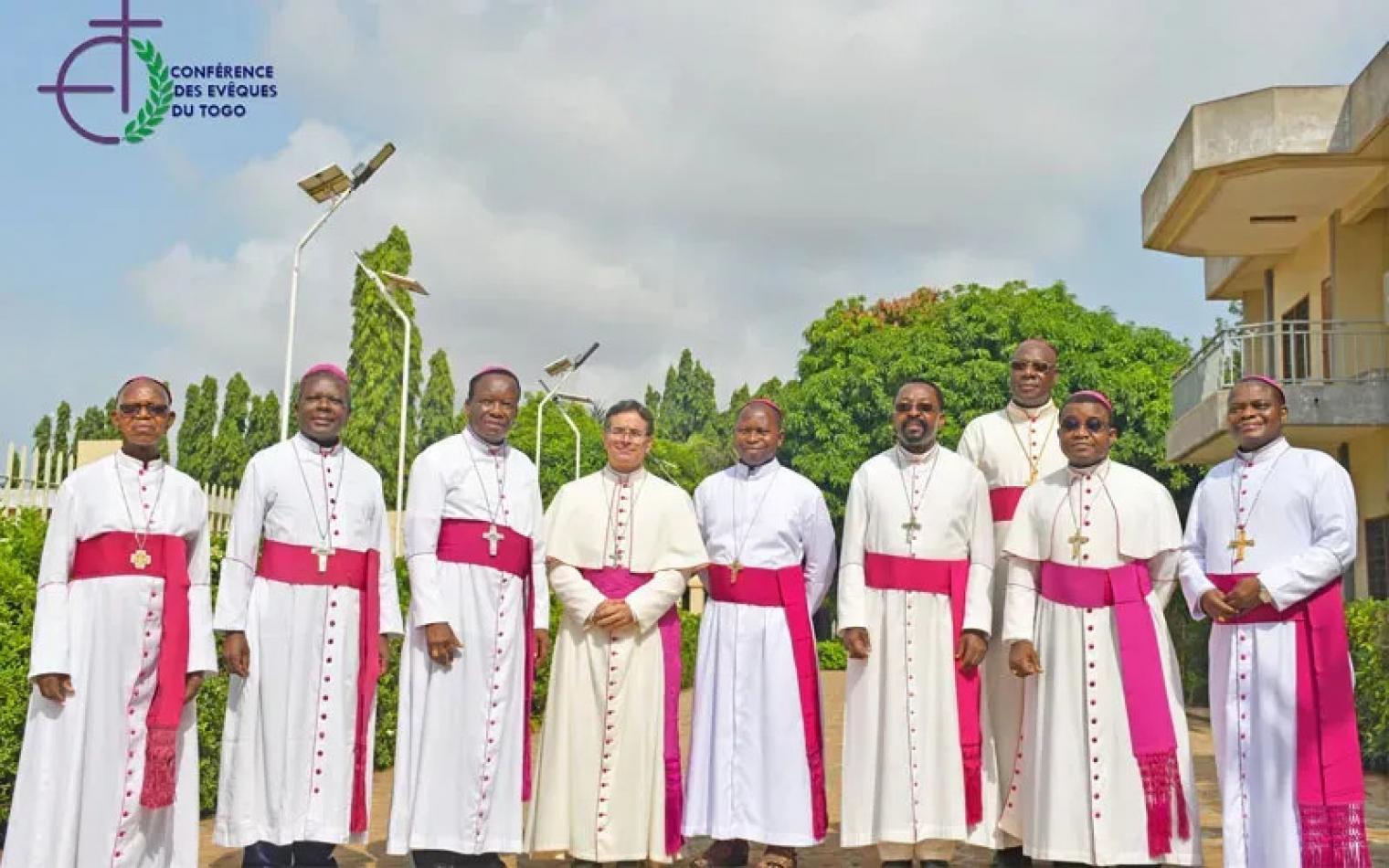 Sunday, October 3, 2021
A recent decision to close places of worship amid a surge in COVID-19 cases in Togo did not take into consideration psychological, social and spiritual realities, Catholic Bishops in the West African nation have said. [
In the picture: Members of the Episcopal Conference of Togo (CET)/ Credit: (CET). Text: ACI Africa]

On September 10, the government announced the extension of a health state of emergency for 12 months and ordered the closing of places of worship for one month. Following consultations with Togo’s Prime Minister, members of the Episcopal Conference of Togo (CET) obtained a one-week exemption for “important religious ceremonies”.

In a collective statement issued over the weekend, CET members say, “The systematic closure of places of worship used as one of the means to fight against the transmission of the virus, is an exclusively biomedical approach of the pandemic that ignores its psychological, anthropological, social and spiritual realities.”

“Places of worship, especially those of the Catholic Church, are places where prevention measures are mostly respected compared to other places that are not affected by the same measures,” the Catholic Bishops in Togo further note in their statement issued September 25. They further note that “prayer gatherings are also occasions, places and times that are conducive to sensitization and education of the faithful on how to behave.”

“Was the contribution of religious authorities sufficiently taken into account in the decision to close these places? Everything leads us to believe that it was not,” the Catholic Church leaders say in their collective statement signed by eight CET members. They further probe, “Haven't places of worship (house of God) always served as refuge in case of disasters or dangers of any kind?”

“The strategy to combat the health crisis we are facing must be respectful of the dignity, freedom and fundamental rights of the human person,” the Catholic Bishops emphasize. The strategies put in place to combat COVID-19, CET members continue, “must be essentially based on sensitization, accurate information, education in the respect of preventive measures (wearing of masks, disinfection of hands, physical distancing), reinforcement of natural collective immunity, administration of curative care, voluntary and informed vaccination, scientific research, etc.”

With a population of just under 8 million, Togo has recorded at least 25,252 cases of COVID-19 including 227 related deaths and 22,433 recoveries. The West African nation has so far received some 1.6 million doses of the coronavirus vaccines. In their September 25 collective statement, CET members also express concerns about forceful vaccination.

“Social media certainly conveys a lot of false information about this vaccination. But one cannot, in a responsible way, sweep aside everything that is said about the reliability, the effectiveness, the danger, the side effects and the problem of the conservation of these vaccines, most of which are in the experimental phase,” the Catholic Bishops say. In the light of this, CET members wonder if “it is really appropriate to use pressure and sanctions to force people to be vaccinated.”

“Shouldn't we rather develop strategies that explain and convince people to make a personal, free and responsible decision?” they pose. The Catholic Church leaders also describe the government’s decision to impose a vaccination pass to access certain public buildings as “coercive measures.”

“Aren't the coercive measures taken by the authorities, such as the ban on access to public and administrative buildings without the vaccination card, the requirement to present proof of vaccination for the submission of files for the establishment of an identity card and for the legalization of documents, etc., serious violations of the basic rights of citizens?” they further pose. Against this backdrop, CET members express their “compassionate closeness to you in this ordeal, congratulate and encourage the efforts and sacrifices of the health care personnel and of all the actors in the fight against the pandemic.”

They invite the people of God in Togo to “keep hope, trust in Christ, the Victor of the world.”

“Let us take care of ourselves and redouble our efforts in the fight against the pandemic; let us be responsible in our choices and continue to implore God's tenderness and mercy on all humanity, with this prayer from the Mass in times of pandemic,” Catholic Bishops in Togo say in their September 25 collective statement.
[Jude Atemanke – ACI Africa]