Archbishop in Zambia Recalls Election Day, Says Zambians Had Chance for “no to impunity” 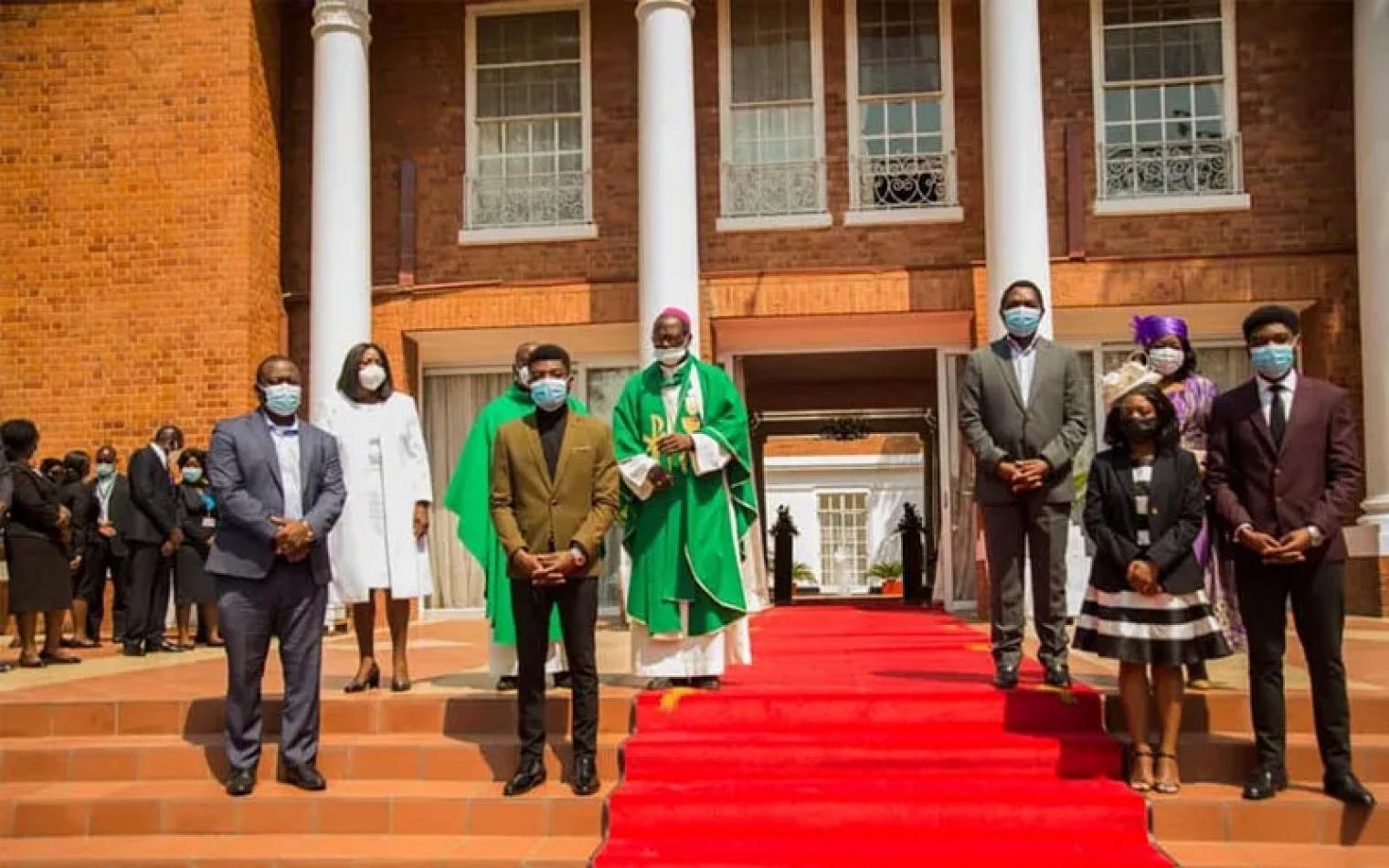 Friday, September 3, 2021
An Archbishop in Zambia has said the August 12 presidential election offered citizens of the Southern African nation the opportunity to say “no to impunity.” [In the picture: Archbishop Telesphore Mpundu with some members of the Hakainde Hichilema-led government after Holy Mass on 31 August 2021. Credit: State House Zambia. Text:
Jude Atemanke – ACI Africa]

In his homily during Holy Mass at State House organized to pray for the new government under the leadership of President Hakainde Hichilema of UPND Alliance, Archbishop Telesphore Mpundu said, “Many people were in a jovial mood on polling day to freely express their choice.”

“Zambians were given a chance to say no to impunity and yes to sanity. That sounds poetic and I’m proud of my own sense of poetry. The celebration continues in a peaceful atmosphere,” Archbishop Mpundu said during the Holy Mass that was organized by Mary Immaculate Catholic Parish Ibex Hill in Lusaka. The Archbishop who was at the helm of Zambia’s Lusaka Archdiocese until January 2018 when he resigned at the age of 70 added, “Zambians are peaceful people – loving people. They refused to be divided on tribal lines and also to be divided on riches lines. They said no – it was time for change. And this change we couldn’t bring on our own. Only God brought it around.”

Zambians showed great maturity during and after the polls and refused to accept that their country was poor, the 74-year-old Zambian Archbishop said, and observed, “We are rich, only that the riches are misused by people who we have elected to lead us. They betrayed us! So, when we went for elections, we said no to this.” The Catholic Church leader said that “it is not God’s will that a few have everything they need and the rest have nothing. This is a sin, asking for vengeance from heaven.”

“We are celebrating a group of people that says ‘we are going to put people first’ and that’s why so many people turned out to vote, the youth especially,” he said in his homily during the Holy Mass attended by President Hichilema and members of his government. He called on the Hichilema-led government to listen to the voice of the people and deliver on campaign promises. “When people speak, it’s God speaking. The voice of the people is God’s voice – don’t disregard it,” the Zambian Archbishop said.

President will have a “monumental task to right the wrongs and that with the support of Zambians, he would do it,” Archbishop Mpundu said. “Let him do it with us. You may or may not agree with me; he (President Hichilema) is a humble President, because he says ‘I want to be at the humble service of God’s people – you and I’. Let us give him that opportunity to perform. Whenever he needs guidance…” he added.

He said President Hichilema would need everything, in terms of intellectual resources, from Zambians. “If we can offer it (intellectual resource), he will willingly take it for the benefit of this nation,” Archbishop Mpundu said. He also acknowledge with appreciation President Hichilema’s assurance that Zambians will not be discriminated against because “they belong to this party or they belong to this province.”

“No! We are all together in it – proud and free. We are not to be slaves to anyone who goes against what is good for the Zambian people. Let us raise our voices!” he added. Addressing himself to the Zambian President, the Archbishop said, “Your Excellency, we’ll support you for our own good.” Also speaking at the Eucharistic celebration, President Hichilema described the Archbishop emeritus of Lusaka Archdiocese as a “soul who stands for the people.”

“We are very grateful, Archbishop; you are a blessing to this country in many ways. If we had our way, we would influence a genetic combination as we produce more children, so that we can produce more that are like you,” President Hichilema said. Unfortunately, he continued, “we are not able to do that because that’s God’s decision and it’s beyond us.”

The Zambian President thanked the Catholic Church for what it has been standing for “all these years”. “This Church has been organized for years and we thank the leadership of the Church centrally and in a devolved way as well,” President Hichilema said. He assured Zambians of peace and unity under his presidency saying, “In the last campaign, the smell of divisions that were projected by some of our citizens is unprecedented. But see what God did to us. He got the young people to defy all those divisive messages and simply we are one people and we are united for a purpose.”

“It is the young people, by and large, who delivered the change that we see. [They] defied all the negativity! It’s a new page, it’s a new dawn. But unity peace doesn’t mean that we are fine. We believe that unity, peace, stability are insufficient if our people remain in poverty,” the Zambian President added.
[Jude Atemanke – ACI Africa]