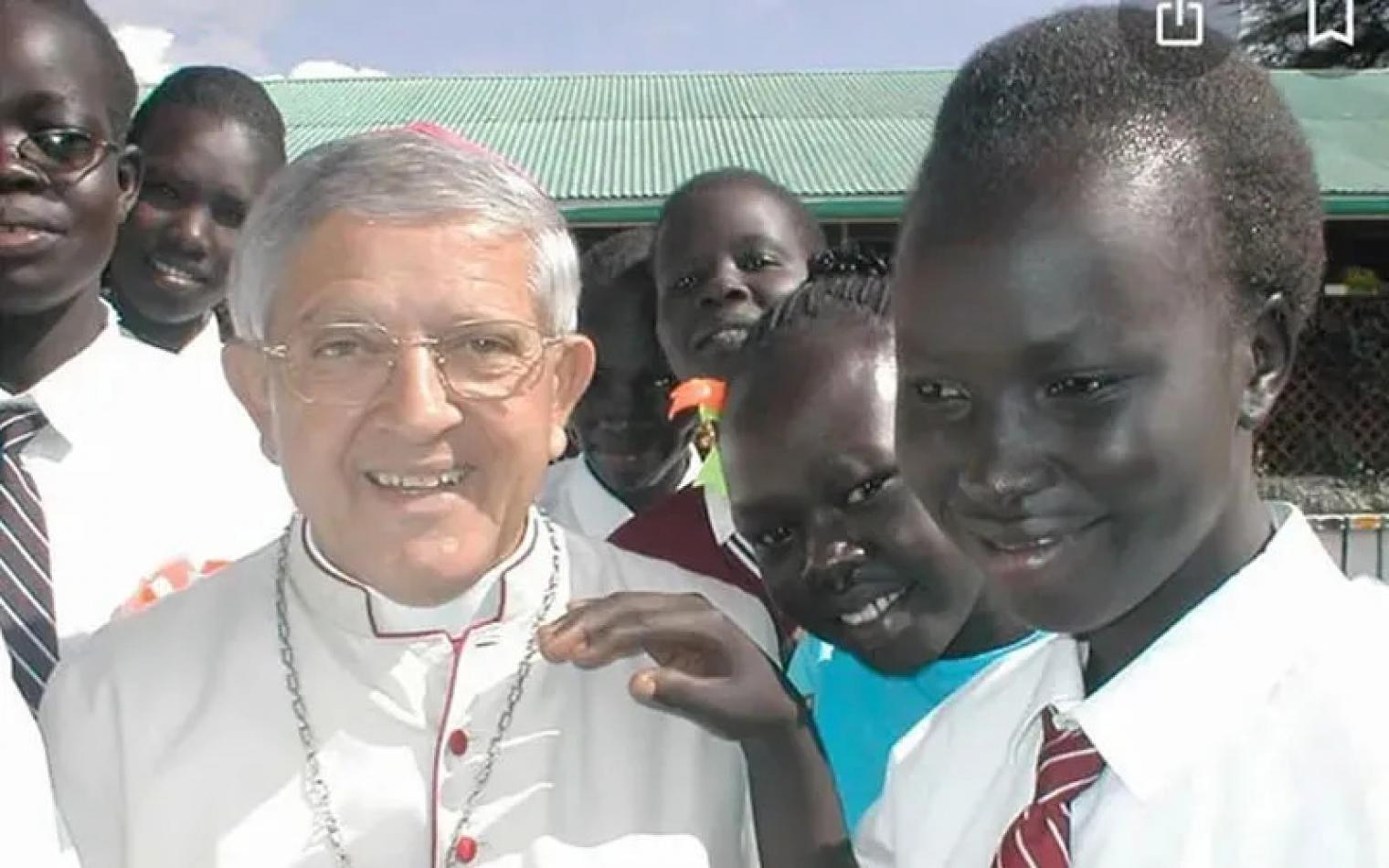 Wednesday, July 21, 2021
A government official in South Sudan has challenged the people of God in the East-Central African country to work towards long-lasting peace, saying that this is the only way to make Bishop Caesar Mazzolari, a Catholic Prelate who worked tirelessly to liberate the country from many years of civil war, proud of the country. [In the picture: Late Bishop Caesar Mazzolari in 2004 with some students of Zeinab Formation Centre, a Girls' School for Rumbek Diocese that the Bishop established in Kenya's Nakuru Diocese. Deborah Akech is on the left in spectacles. Credit: Courtesy/Deborah Akech]

Deborah Akech Kuocnic, the Minister of Labor, Public Service and Human Development in South Sudan’s Lakes State paid tribute to Bishop Mazzolari who passed on ten years ago during the late Bishop’s anniversary last Friday, July 16. In his tribute shared with ACI Africa, the Lakes State Minister said, in reference to Bishop Mazzolari who served the Catholic Diocese of Rumbek from 1990 until his death on 16 July 2011, “As we reflect today about this country and the Diocese that he so loved, let's ask ourselves these simple questions: is this country in a state that he would have expected it to be? Is this Diocese like what the late Bishop Caesar Mazzolari would have wanted it to be?”

She added, “We know the simple answers to these simple questions. I think we can do better and make him (Bishop Mazzolari) proud in his grave.” Mrs. Akech remembers that in his pursuit for liberation of South Sudan, which gained independence on 9 July 2011, the late Bishop never complained about the hardships that he went through even in the hands of militants in the country that was plunged deep in one of the world’s longest civil war.

“He (Bishop Mazzolari) was once banned from coming to South Sudan by the SPLA High Command although what he was doing was for the benefit of the very people who banned him,” the South Sudanese Minister says, and adds, “Anyone else in his shoes would have thrown in the towel and gone somewhere else. He never gave up on his people until the ban was lifted.” The government official who attended Zeinab Girls’ Secondary School, one of the schools that Bishop Mazzolari founded in Kenya’s Nakuru Diocese amid civil war in Sudan, says that the late Bishop “never lost sight of the need for peace.”

“He constantly prayed for peace in South Sudan,” Mrs. Akech says, adding that the member of the Comboni Missionaries is remembered for having written a prayer for peace in South Sudan that was recited every day in all the schools, Parishes, and institutions of the Catholic Diocese of Rumbek. The Bishop’s most quoted verse from the Bible, she recalls, was drawn from the Gospel of Matthew 5:9, “Blessed are the peacemakers, for they shall be called children of God.”

The South Sudanese Minister who previously worked in South Sudan’s National Bureau of Statistics says that Bishop Mazzolari played a vital role during referendum campaigns that led to the country’s independence from Sudan on 9 July 2011. “He told the people that this was the only chance that would grant us sovereignty and be first class citizens in our country. The people overwhelmingly voted for independence,” she recalls in her reflection shared with ACI Africa and posted on her Facebook page on July 16.

Mrs. Akech recalls that a week before South Sudan was declared independent, Bishop Mazzolari’s doctor requested him to travel to Nairobi in Kenya such that the independence could be celebrated in his absence, but that the Bishop could hear nothing of it. The Lakes State Minister narrates that the doctor was aware of what the excitement of independence declaration would have on his health. Mrs. Akech recalls the Bishop’s reply to his doctor, “All I have ever wanted was an independent and peaceful South Sudan. If I die after I have seen South Sudan as a separate nation, I will die a happy man.”

The Italian-born Bishop presided over prayers on South Sudan’s Independence Day at Rumbek’s Freedom Square and died one week later. The Rumbek-based Lakes State government official likens the life, work and death of Bishop Mazzolari to that of Jesus, saying, “It was just like what Jesus said on the cross, ‘it is accomplished!’ Jesus did what his father sent him to do on earth and it was time to return to his father.”

“The late Bishop Caesar Mazzolari passing on a week after independence declaration, showed that he has accomplished his mission for peace in South Sudan,” she says, and adds, “It was time to go back home to the father who chose him to be a peacemaker and the shepherd of this Diocese.”

Bishop Mazzolari died at the age of 74 while concelebrating Holy Mass the morning of 16 July 2011. Those present at the Eucharistic celebration said the Bishop had a seizure. He is said to have stumbled back onto his chair during the time of consecration and grabbed his chest while gasping for air. After being rushed to Rumbek State Hospital in Rumbek, the medical doctor at the hospital pronounced dead at 8 a.m.

In messages shared with ACI Africa on the 10th anniversary of his passing on, the late Bishop was described as “a true man of God…a man of the people” and a true peacemaker who gave his all for the liberation of South Sudan from years of civil war, poverty and illiteracy. Mrs. Akech describes the passing on of Bishop Mazzolari as the hardest moment for the Catholic faithful in South Sudan, especially in the Diocese of Rumbek.

“We were all heartbroken and confused. At that moment I felt like a sheep without a shepherd. Without his guidance we would lose direction and go astray,” she says in her reflection shared with ACI Africa. “When the late Bishop Caesar Mazzolari came to South Sudan, the Catholic Diocese of Rumbek saw light at the end of the tunnel,” the Lakes State government official says. She adds, “Those of us whose hopes for education were dashed got them restored. He established Comboni school Mapuordit and that school became the champion of education in a war-torn South Sudan.”

She says that the celebration of the 10th anniversary of the death of the native of Italy’s Brescia Diocese brings back fresh sorrow. “I personally miss him a lot because he was my spiritual guardian. This day brings back fresh tears in my eyes just like on July 16th 2011,” Mrs. Akech says, and adds, “Your Lordship Bishop Caesar Mazzolari, we love you but God almighty who gave you to us loves you the most.”

“Please intercede for us and this Diocese such that the peace that you yearned for while alive can prevail. May your precious soul continue resting in perfect peace!” Mrs. Akech implores.
[Agnes Aineah – ACI Africa]