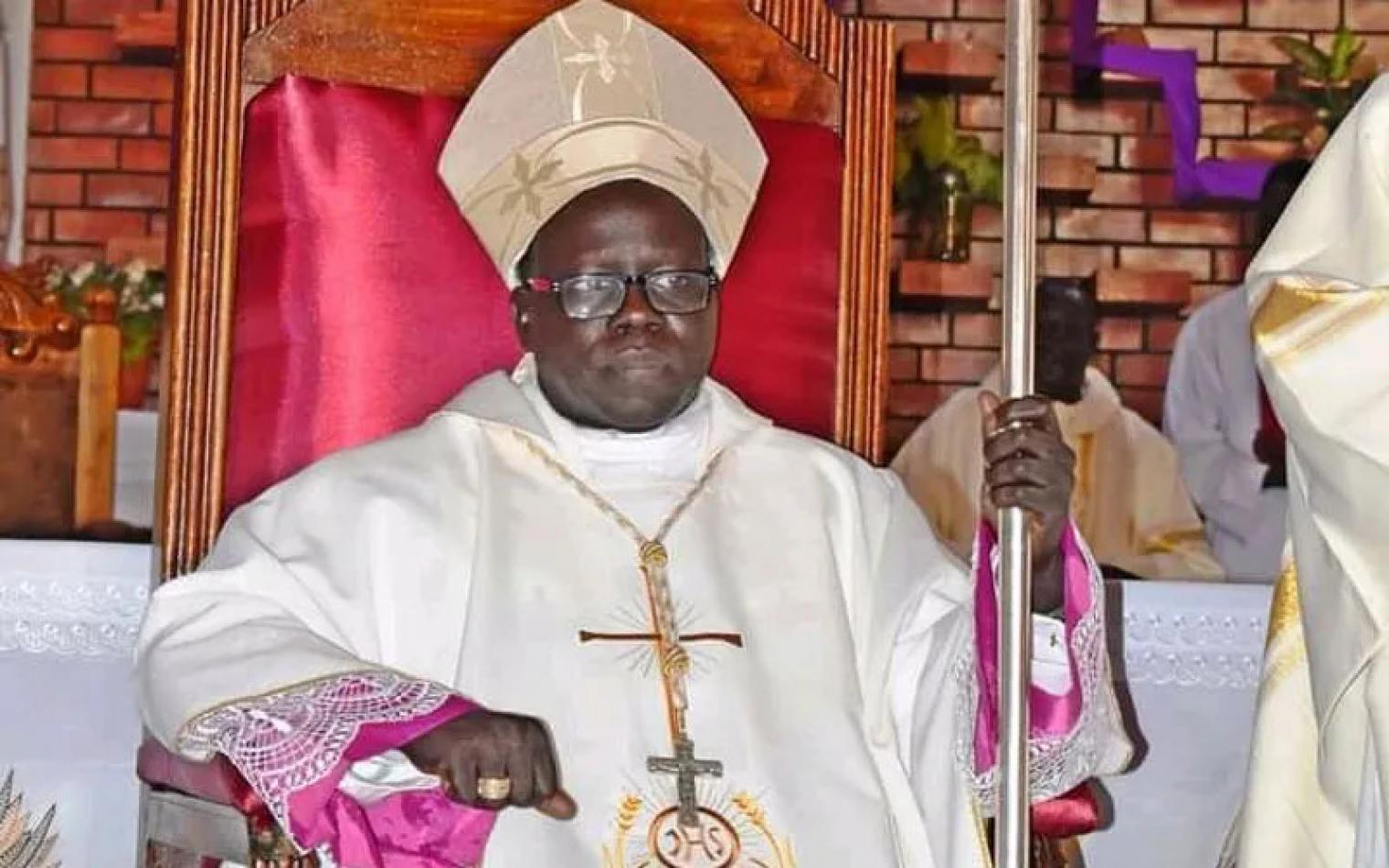 Wednesday, June 30, 2021
The Archbishop of South Sudan’s Juba Archdiocese, Stephen Ameyu [in the picture], has discouraged the practice of death penalty in the East-Central African nation and promised to face the country’s judiciary to push for its abolition. [Text and photo:
ACI Africa]

In his Sunday Homily, June 27 at St. Theresa’s Cathedral, Kator, Archbishop Stephen Ameyu expressed the readiness of the Catholic Church in the world’s youngest nation to dialogue with the Ministries of Justice and Constitutional Affairs on eliminating capital punishment and substituting it with life improvement. “As Catholics, we will walk through the office of the Chief Justice to talk about abolishing sentencing of people to death. We will push for life sentences instead,” Archbishop Ameyu said. He added, “All of us need life and life is the gift of God, a gift that is very sacred, and no one should take that gift away.”

In December 2018, The Guardian reported that over 140 people were sentenced to death and at least 32 executed since independence of South Sudan in July 2011. Although South Sudan only allows the death penalty for crimes that include murder, terrorism, drug trafficking and treason, Amnesty International has recorded the country having carried out executions every year since independence except in 2014.

Reminding the government of the country on preserving lives, Archbishop Ameyu said that life is very sacred and that no one deserves to take it away. “The book of Wisdom tells us that life comes from God; it is not from anyone else, not from your father, not from your mother,” the Prelate said. The Archbishop called on the citizens of South Sudan to reflect upon the importance of life and how much humanity struggled to protect it amid the COVID-19 pandemic. “During this time of the pandemic, we should reflect on how doctors toiled to get a vaccine because they would like to preserve life,” he said, and added, “We are the stewards of this life that God has given to us, we are to defend it, we are to protect it.”

The Republic of South Sudan is one of the countries in Sub-Saharan Africa that carry out executions on the basis of violent crimes including murder. In an interview with ACI Africa Monday, June 28, a South Sudanese lawyer who chose to be unidentified said the country practices capital punishment only to deter people from committing crimes. The lawyer further said South Sudanese are expected to be less likely to commit crimes if they know they would face punishment by execution. “People sentenced to death stay in the prison and sometimes they are pardoned on big days by the president,” the South Sudanese lawyer told ACI Africa, and added, “If death penalty is not in the law, people will commit crimes knowing they will get away with it.”

South Sudan inherited capital punishment from Sudan’s Criminal Act 1991, which is based on Sharia law that prescribes both the death penalty and corporal punishment. When Pope Francis revised number 2267 of the Catechism of the Catholic Church in August 2018, he described death penalty as “an attack on the inviolability and dignity of the person” and that in all cases, it is “inadmissible.”

The Catholic Church “works with determination for its abolition worldwide,” the Holy Father said in reference to death penalty. Today, he explained, “There is an increasing awareness that the dignity of the person is not lost even after the commission of very serious crimes. In addition, a new understanding has emerged of the significance of penal sanctions imposed by the state.”

“Lastly, more effective systems of detention have been developed, which ensure the due protection of citizens but, at the same time, do not definitively deprive the guilty of the possibility of redemption,” Pope Francis further explained in his revision of 2 August 2018, underscoring the need to abolish death penalty. Two years later, in his Encyclical Letter, Fratelli Tutti, the Holy Father officially placed the abolition of the death penalty in the forefront of the teachings of the Catholic Church. “There can be no stepping back from this position. Today we state clearly that ‘the death penality is inadmissible’ and the Church is firmly committed to calling for its abolition worldwide,” Pope Francis states in the Encyclical Letter.

In the 3 October 2020 document, he makes reference to the death penalty twelve times, and calls upon Catholics around the world to support both the abolition of capital punishment and improved prison conditions. He links the death penalty to life imprisonment saying, “A life sentence is a secret death penalty.”

Although most nations have abolished capital punishment, over 60 percent of the world's population live in countries where the death penalty is retained, such as China, India, the United States, Indonesia, Pakistan, Bangladesh, Nigeria, Egypt, Saudi Arabia, Iran, as well as in Japan and Taiwan. Several institutions and organizations around the world, including Amnesty International oppose the death penalty in all cases without exception regardless of the nature of the crime, the characteristics of the offender, or the method used by the state to carry out the execution.
[Peter Mapuor Makur – ACI Africa]