Philippines: five centuries of Christianity, looking forward to the future 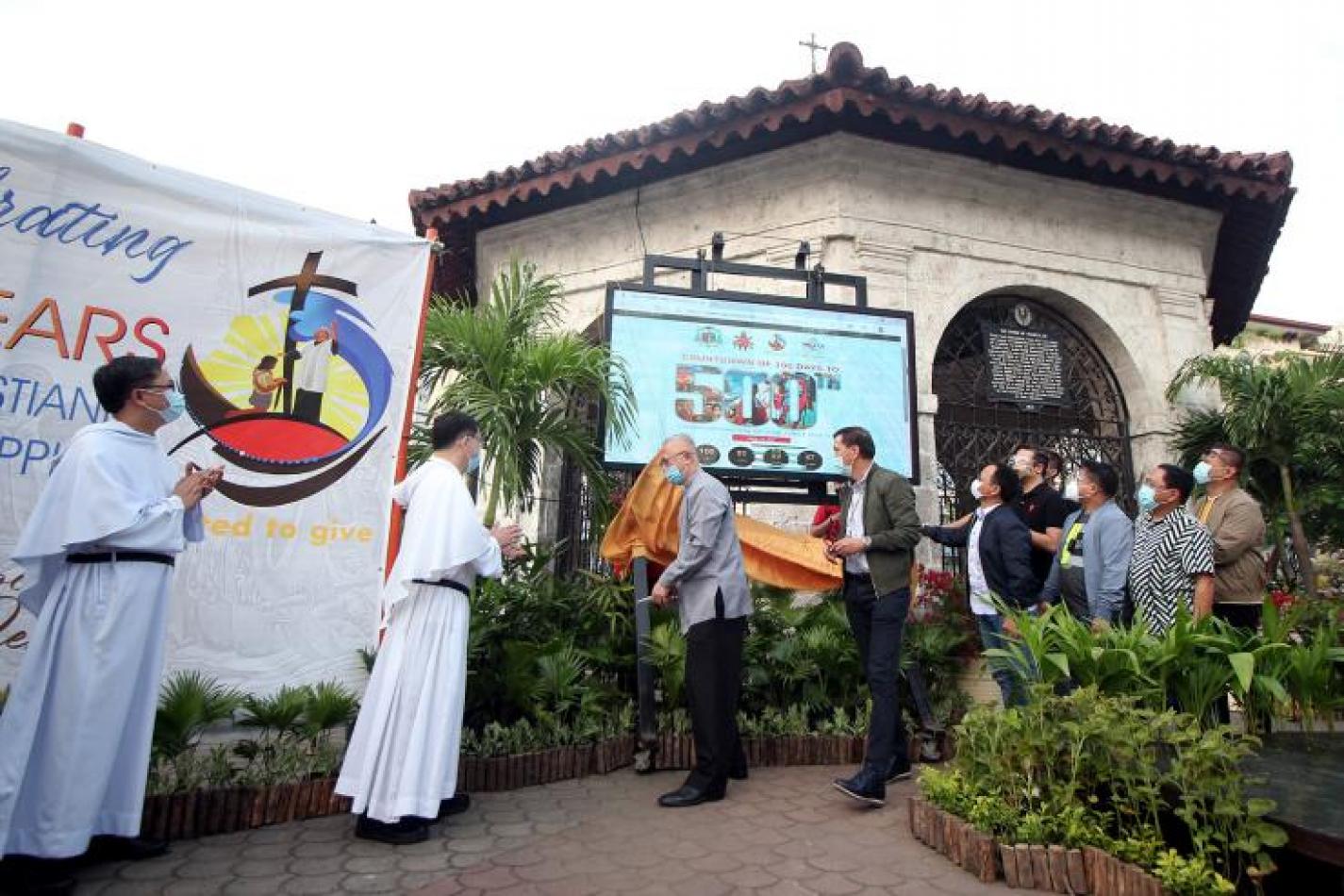 Monday, April 12, 2021
In 2021 the Church in the Philippines marks half a millennium of Christianity. “We are all ‘gifted to give.’ This is a challenge to both celebrate the Christian faith and be vigorously motivated to go and share this precious gift with others.” [
James H. Kroeger, MM - Comboni Missionaries]

The latest statistics show that the Philippine population has reached nearly 110 million. The Philippines is the world’s third largest local Church (after Brazil and Mexico). Of Asia’s 120 million Catholics over 60% are Filipinos. These significant facts invite deeper exploration of the multi-faceted Philippine Church.

Some may ask: Why celebrate this event? Bishop Broderick Pabillo, apostolic administrator of the Archdiocese of Manila, explains: “This is indeed something to celebrate, for in 500 years the Christian faith in the country has not only survived, but has been a strong influence in the culture and character of the nation, and is still going strong… The 2021 celebration will be marked with great thanksgiving to Almighty God for the great gift of the Christian faith. In God’s providence the Christian faith has come to our shore, took root in it, and bore much fruit among its people.”

The Catholic Bishops’ Conference of the Philippines (CBCP) logo for the 2021 event asserts: we are all “gifted to give.”

After the introduction of Christianity by Ferdinand Magellan in March 1521, a systematic and organized program of evangelization was begun in 1565 by the Augustinians who accompanied the Basque Spanish Miguel López de Legazpi’s expedition.

The early missionaries often sought to protect the natives from abuses; they had a vigorous leader in Fray Domingo de Salazar, OP, the first bishop of the Philippines.  The Philippine Church of the sixteenth century certainly took sides, and it was not with the rich and powerful, but with those who were oppressed and victims of injustice.

Church historian John Schumacher notes: “Sceptics have often questioned the reality of the rapid conversion of sixteenth-century Filipinos.  If one wishes the answer, it is to be found right here, that the Church as a whole took the side of the poor and the oppressed, whether the oppressors were Spaniards or Filipino principales.”  Promoting both faith and justice remains a perennial task of every local Church.

These tasks were almost exclusively the concern of the Church during the entire period of Spanish rule. Before the end of the sixteenth century, Manila had three hospitals, one for Spaniards, another for natives, and a third for the Chinese. In 1595 the Jesuits opened a grammar school for Spanish boys that later developed into the University of San Ignacio and had attached to it the residential college of San José, founded in 1601 and today the San José Seminary.

The year 1611 saw the beginnings of the Dominican University of Santo Tomás, which continues today as a vibrant educational centre. In 1640 the Dominicans also took charge of the College of San Juan de Letrán, started about a decade earlier by a zealous layman for the education of orphans. Various religious communities of women established themselves in Manila; frequently, they undertook the education of girls.  Numerous educational institutions and social action centres operated by the Church continue to play an important role in Philippine life.

Catholicism had taken permanent root in the Philippines as the religion of the people by the eighteenth century, if not earlier. However, one serious weakness was the slow development of the native clergy. Apparently, only in the late seventeenth century were native Filipinos ordained.  Bishops became increasingly eager for a diocesan clergy completely under their jurisdiction.

Archbishop Sancho de Santa Justa y Rufina of Manila (1767-1787) ordained native before they had been offered the necessary training; the results proved disastrous.  Some improvement in formation and an increase in vocations occurred after the arrival of the Vincentians (1862), who took charge of diocesan seminaries.

Among the active priest leaders and social spokesmen were Fathers Gómez, Burgos, and Zamora, who were executed by the government for alleged complicity in a mutiny of native garrison troops in Cavite (1872); they are considered national heroes today.

Historically, the slow development of the local clergy remained a serious limitation; thus, the departure of a large proportion of Spanish clergy after the transfer of sovereignty from Spain to the United States (1898) left over 700 parishes vacant.

The normal life of the Catholic Church suffered disastrously during the years following 1898; from 1898 to 1903 the total number of friars decreased over 75% from 1,013 to 246. This severe shortage of priests and religious was met in part by new, non-Spanish missionary congregations of women and men from Europe, Australia, and America. Among others: Irish Redemptorists, Mill Hill Missionaries, Scheut-CICM, Sacred Heart Missionaries and Divine Word Society, LaSalle Brothers, Oblates of Saint Joseph, Maryknoll Missioners, Columban Missionaries, Society of Saint Paul, Quebec-PME Society and Oblates-OMI. Most of these societies have personnel in the country today.

Japanese forces invaded the Philippines in December 1941.  Allied forces under General MacArthur returned in 1944, but severe fighting continued until the Japanese surrender in August 1945. The war inflicted heavy damage; 257 priests and religious lost their lives, and losses in ecclesiastical property. Priests, brothers, sisters, and dedicated Catholic women and men exhibited great faith and heroism during the war; many suffered imprisonment.

The origins of what is known today as the Catholic Bishops’ Conference of the Philippines (CBCP) can be traced back to February 1945 when Apostolic Delegate William Piani, even as the war was still raging, appointed John Hurley, SJ to take charge of relief work and created the Catholic Welfare Organization (CWO).

The 1945-1965 period in the life of the local Church in the Philippines is characterized by: quite rapid recovery from the ravages of war, greatly expanded school system at upper levels, involvement of Catholics (laity, sisters, clergy) in social action, and growing Filipinization of Church structures.

Ferdinand E. Marcos, first elected president in 1965, declared martial law in 1972 and imposed a form of “constitutional authoritarianism.”  The martial law period posed new, challenging questions for the Church and nation. Among the more pernicious effects of the two-decade Marcos era (1965-1986) were: increased militarization, insurgency, the absence of juridical procedures, the destruction of democratic processes, economic decline, and pervasive fear.  The end result, in the words of a Filipino social scientist, was to place the country “on the trembling edge of a social volcano.”

This period proved a time of testing and growth for the local Church.  Prophetic stances were often met by military abuse, imprisonment and torture, and even deportation for foreign missionaries.  The Church evolved a position of “critical collaboration,” cooperating with the regime on programs beneficial to the populace while criticizing government actions judged harmful.  An important 1977 CBCP pastoral letter, The Bond of Love in Proclaiming the Good News, sought to enunciate a clear, holistic vision to guide the Church’s mission of integral evangelization.

The Philippine presidential and vice-presidential elections were held on February 7, 1986. The church and in particularly of the Cardinal Jaime Sin Archbishop of Manila played a significant rule to overthrow Marcos’ regime.  It was “a victory of moral values over the sheer physical force on which he had relied.”  It signalled people’s determination not to shed Filipino blood.

The revolution was a “movement for active non-violence which was promoted by Church-related groups.”  However, basic social issues of wealth and power that plagued the nation for generations remained.  Many Filipinos still found themselves outside the mainstream of national social, political, and economic life.

Corazon C. Aquino took over and served as Philippine president from 1986-1992.  Aquino’s main contribution was the reestablishment of a democratically functioning government. Difficult issues faced Aquino; yet she guided the Filipino people to free and fair elections in May 1992 and the orderly transfer of power to President Fidel Ramos (1992-1998).  Aquino, an “icon of integrity,” died on August 1, 2009.

The vision of the Second Vatican Council has taken root in the Philippine Church.  The presence of strong Base Christian Communities (BECs) provides grass roots structures for spiritual, catechetical, ministerial, and social growth. Important strengths are present in this vision of Church: the inductive and experiential approach of theology; its inculturated social teaching; its spirituality of human development; its renewed ecclesiology and missiology; its concrete service to many Filipinos facing diverse dehumanizing social ills; its engagement in social issues in a non-partisan but active manner; its efforts to promote and practice non-violent approaches to socio-political crises; its commitment to create structures of participation in Church and society.

A definite sign of a vibrant local Church is its mission outreach.  In mid-2000 Catholic Filipino missionaries numbered 1,329 women and 206 men from 69 religious congregations serving in some 80 countries.

One may validly assert that over the past five centuries an authentic local Church has emerged in the Philippines; undoubtedly, this is a wonderful gift of the Holy Spirit!  This local faith-community exemplifies the vision propagated by the Federation of Asian Bishops’ Conferences (FABC), which asserts that “the local church is a church incarnate in a people, a church indigenous and enculturated.

And this means concretely a church in continuous, humble and loving dialogue with the living traditions, the cultures, the religions—in brief, with all the realities of the people in whose midst it has sunk its roots deeply and whose history and life it gladly makes its own.

The FABC challenge to engage in a “triple dialogue” with the local people, their cultures, and their religions as a verified pathway to building an authentic local Church has been guiding Church leadership in this Vatican II era.  This “incarnational approach” has proven to be effective in the Philippine context; it must continue to guide all the evangelization initiatives for the next many decades and even centuries.
[James H. Kroeger, MM - Comboni Missionaries]