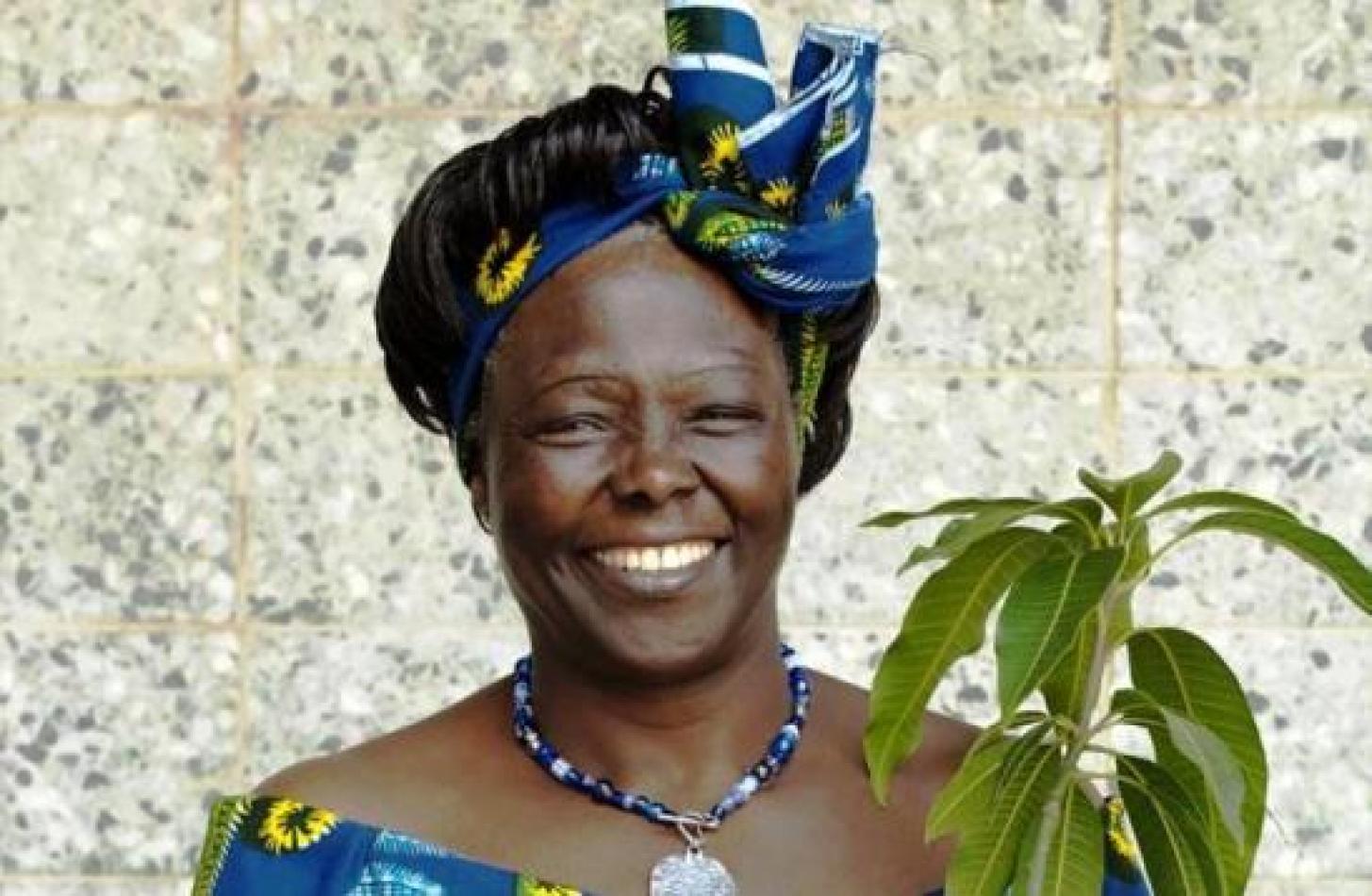 Friday, August 30, 2019
Through her Green Belt Movement, Wangari Maathai mobilised thousands of women to plant millions of trees in Kenya. With this brainchild, she showed that any initiative counts—and it can count a lot—and received the Nobel Peace Prize in 2004. A practising Catholic, she was a member of the Legion of Mary throughout her life. Cancer took her away prematurely in 2011.

Wangari  was born on 1 April 1940, in the Nyeri District in central Kenya, of a family of simple means belonging to the Kikuyu ethnic group. She was, however, privileged to live in a part of the country of breath-taking beauty, close to Mount Kenya, which the Kikuyu people call Kiri Nyugu (the Creator’s House) and to the Aberdare Range, the largest forest and water reservoir of the country. As she beautifully writes, the experiences of her youth shaped her love for the land:

“Nothing is more beautiful than cultivating the land at dusk. At that time of day, in the central highlands, the air and the soil are cool, the sun is going down, the sunlight is golden against the ridges and the green of trees, and there is usually a breeze. As you remove the weeds and press the earth around the crops you feel content, and wish the light would last longer so you could cultivate more. Earth and water, air and the waning fire of the sun combine to form the essential elements of life and reveal to me my kinship with the soil.

As all the girls of the same age, Wangari was dreaming of going to school. She was more courageous than most and it was not difficult for her to fulfil her desires. She received quality education first with the Consolata Sisters and later with the Loreto Sisters.

She then received a scholarship to study in the United States of America.  In 1964, she took a diploma in biology and in 1966 a degree in science at Pittsburgh University in Pennsylvania. In 1971, back in Kenya, she completed her doctorate at Nairobi University. She then started teaching at the university. She was the first woman in East Africa to gain a Ph.D. and to hold the position of university professor.

Wangari’s love for nature was soon tested by the population explosion and consequently by the need for growing ever more food. Moreover, in order to support the agricultural needs, people started cutting the nearby forests in order to extend their fields. In those years it was almost impossible to make the farmers understand that, in the long run, the deforestation would have devastating effects also in agriculture and on the whole environment. Therefore, when Wangari started the campaign in favour of the land, many people looked at her with hostility.

Notwithstanding the opposition, Wangari did not bend and even risking her personal safety, kept on with determination on the road she had started. For her, Mother Nature, as she used to say, needed first to be respected in order for people to enjoy the benefits of her goodness. In harmony with the African spirituality, Wangary cared first for the indigenous trees, the roots of which contributed considerably to check the soil erosion, and in particular, the mugumu tree, under the shade of which the most important meetings of the community were taking place, since the ancestors used to value it as a manifestation of the vitality and creative power of God. Wangari had a special concern towards the younger generations, aware as she was of the many implications of inheriting a totally exhausted land, robbed of its resources.

The efforts to keep the integrity of the environment found a concretisation in 1977 with the birth of the Green Belt Movement that Wangari started and promoted. The main objectives of the initiative were to exercise pressure on the politicians in order to foster laws respectful of nature, and to educate the youth about the environment, and especially mobilise the women. Kakura Forest, Uhuru Park and the Great Lakes Region will be remembered as among the most relevant initiatives in which Wangari lavished her competence and energies.

Kakura Forest is the main green lung of Nairobi, a section of the urban area always in the sight of developers and corrupt politicians engaged in building. Uhuru Park is the second green lung of the capital, a welcoming area for the free gatherings of the population, especially the slum dwellers. In order to defend the integrity of these two zones, Wangari had to face opposition, mudslinging campaigns and even political marginalisation.

In the Great Lakes Region the huge African rivers, the Nile, the Congo and the Zambezi originate and this is where so many endangered animal species thrive. The Green Belt Movement became the ‘spokesperson’ of these areas and up to the present it maintains a network of educational activities. To plant trees is now a set feature in all the social gatherings of the area.

Wangari had married in 1969 and had three children, but her powerful personality was too much for her husband, who separated from her and eventually filed for divorce in 1979, saying that she was “a too strong-minded woman” and that he was unable “to control her”. Since then, Wangari’s life was a solitary even if successful battle.

As long as the women limited themselves to plant trees, there was nothing for the politicians to be afraid of, so much so, that in a few years the plant nurseries numbered 6 000 and the “foresters without a degree” more than 80 000. They could all be potential voters at the moment of political elections. On the other hand, the new forests could only please the politicians whose saw-mills were indiscriminately laying waste to the forests and whose foresters kept underselling the natural wealth of the country—but Wangari had something else in mind.

“It is not only a question of reforesting the country”, she stated “but also of fighting for democracy and the respect for human rights.” She wanted especially to empower the women through seminars, laboratories, demonstrations and ecological initiatives in which science, social commitment and political education could go together. The Green Belt Movement became a network of initiatives concerning women education, family planning and campaigns against corruption.

The idea became popular also outside Kenya: in Tanzania, Uganda, Malawi, Lesotho, Ethiopia and Zimbabwe, women got together to promote Wangari’s ideals. The experts in the environment from all over the world started appreciating Wangari. Several acknowledgements and awards started materialising, among them the Goldman Foundation Award (1991) which represents a kind of Nobel Prize among the ecologists—but the most pleasing acknowledgement was conferred to Wangari by her fellow women who called her their “Freedom Fighter”.

In October 2004, Wangari Maathai was awarded the Nobel Prize for Peace. The Nobel Prize at last came to an African woman, as representative of the heroic African women who are the backbone of their families and countries. In the written motivation for the award, “Wangari’s contribution to sustainable development, democracy and peace” are clearly mentioned. This sums up her steady commitment for the environment, her civic passion for the respect of human rights and the promotion of peace among peoples: a precious heritage worth keeping and valuing by everybody.

She wrote: “Although I was a highly educated woman, it did not seem odd to me to be working with my hands, often with my knees on the ground, alongside rural women. Some politicians and others in the 1980s and 1990s ridiculed me for doing so. I had no problem with it, and the rural women both accepted and appreciated that I was working with them to improve their lives and the environment. After all, I was a child of the same soil. Education, if it means anything, should not take people away from the land, but instil in them even more respect for it, because educated people are in a position to understand what is being lost. The future of the planet concerns all of us and we should do what we can to protect it:’

In Africa, the binomial, environment and peace, constitutes an unbreakable reality: in fact in no other continent is the desertification so worrying as what is happening in many African countries. When the desert advances, the essential life infrastructures are lacking and entire peoples are forced to migrate in search of pastures, water and sustenance. Situations as such, trigger strong tensions and social instability.

She was an elected Member of Parliament and served as assistant minister for Environment and Natural Resources in the government of President Mwai Kibaki between January 2003 and November 2005.

Wangari died of cancer in 2011. A convinced, practising Catholic and member of the Legion of Mary her whole life, Wangari Maathai was, however, always very discreet in the practice of her faith, but public was her appreciation for whatever could unite the faithful of different denominations and religions in building a society that was nature friendly and respectful of all its inhabitants.
http://www.combonimissionaries.co.uk