Ethiopia: The Monastery of Hayk 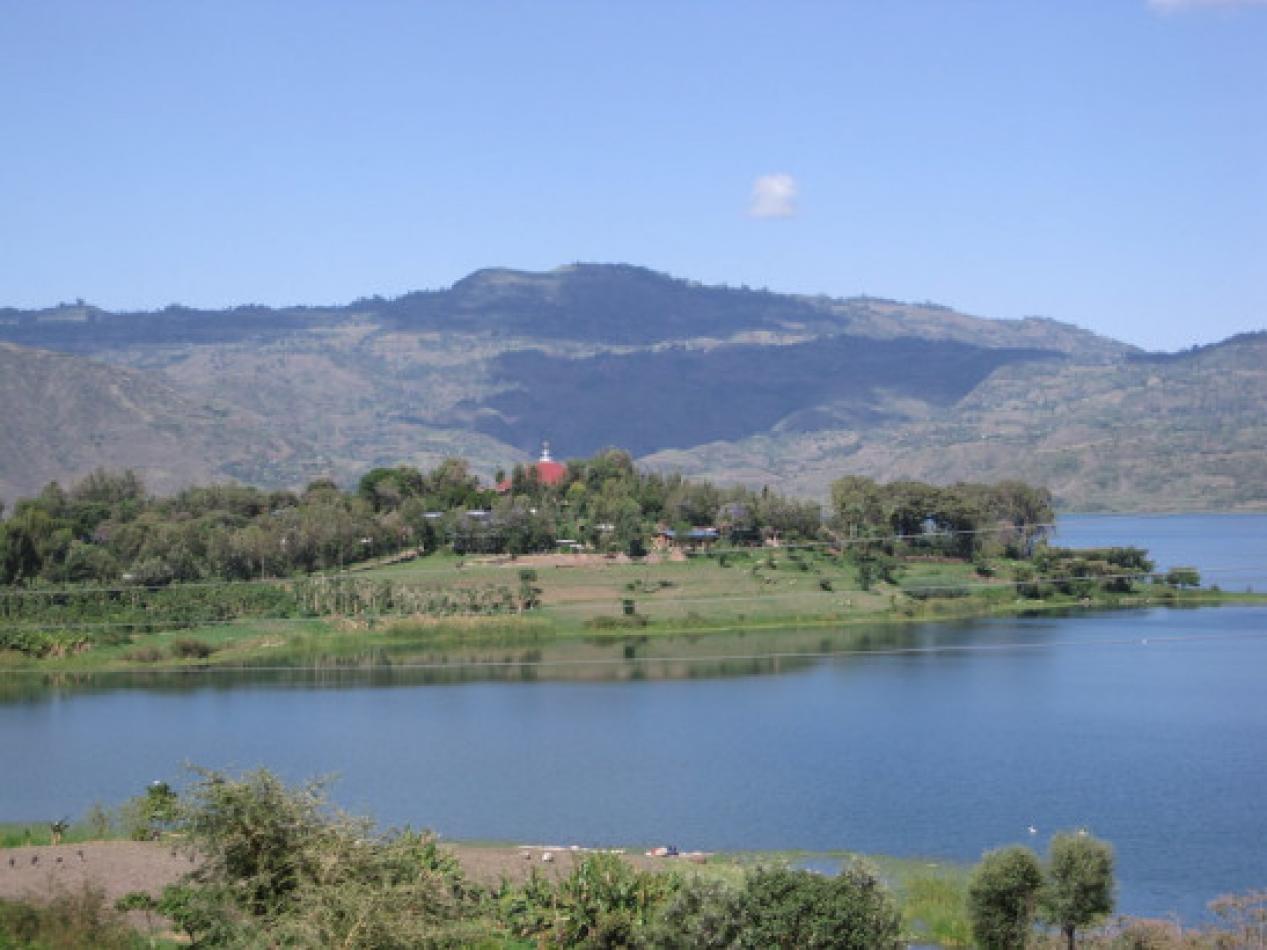 Friday, May 17, 2019
The importance of Hayk begins in the thirteenth century when Iyasus Mo’a founded a monastery on the island. The most notable presence in the monastery is a manuscript of the Book of the Gospels written between 1280 and 1281, which is considered the oldest manuscript existing today in Ethiopia.

The modern city of Hayk is located on the main road which goes to the north, about 60 km north of Dessie in the administrative Zone of South Wollo. It is named after a small lake 6.7 km long by 6 km wide in a flat and fertile land. Hayk means precisely ‘lake’. On a small island, which is now linked with the main land forming a peninsula, a church of Axumite style was built in the eighth century and dedicated to St. Stephen. It was destroyed by the Muslim condotiero Ahmed Grañ in 1531 and rebuilt more than once.

The importance of Hayk begins in the thirteenth century when Iyasus Mo’a founded a monastery on the island. Iyasus Mo’a lived between 1214 and 1293. We know about his life from his Acts or Gedle Iyasus Mo’a, which were written in the fifteenth century and underwent various modifications over time. There is more than one version. All that raises serious doubts about their historical value. From the information they give we can conclude that Iyesus Mo’a was a monk in the monastery of Debre Damo where, after seven years of novitiate, he received his monastic habit from Abad Yohanni. From Debre Damo he moved to the island of Hayk, next to the church of San Esteban. There he founded his own monastery, which soon became famous and influential. From it would come out five great personalities that are known as the five ‘lights’. The most shining one was Tekle Haimanot, future founder of the Debre Libanos monastery.

According to some of the versions, the greatness of the monastery would also be linked to the prominent role that Iyasus Mo’a played in the restoration of the so called Solomonic dynasty, which occurred in 1270. It is said that the first king of this dynasty, Yekuno Amlak, was in his youth a novice in Hayk and was educated by Iyasu Mo’a.

Yekuno Amlak, an alleged descendant of the ancient kings of Axsum, of Semitic stock and language, defeated Yitbarek, the last king of the Zagwe dynasty, of which the greatest figure was King Lalibela, builder of the churches of the city that bears his name. The kings of the Zagwe dynasty were Agaw, of Hamitic stock, and considered usurpers by the Semitic people. In gratitude for the support of Iyasus Mo’a, Yekuno Amlak granted the monastery the entire island, sending away the inhabitants who were not monks.

The intervention of Iyesus Mo’a in the restoration of the Solomonic dynasty is in contrast with other sources which attribute this merit to Tekle Haimanot. It is not infrequent in the Acts or Geldes that they attribute the same episodes, virtues or miracles to several saints.

From the sixteenth century, after being destroyed by the Muslim leader Ahmed Grañ in 1532, Hayk’s monastery no longer saw moments of splendor. On the contrary, it gradually lost importance, especially in front of the monastery of Debre Libanos. Between the two there was always a latent competition. In the various controversies that took place throughout history between the ‘House of Ewostatewos’ and the ‘House of Tekle Hamanot’, the monastery of Hayk, being geographically more connected with the north,  was preferably in the sphere of the first.

In the dispute that took place around the’anointing’ of the humanity of Jesus, Hayk defended the thesis called qarra (knife) against the other two schools called qebat(anointing), followed in Gojjam, and Sost Lidet (three births) or Ye-tsegga lij (Son of grace), led by Debre Libanos and followed in the monasteries of the south. This controversy lasted from the end of seventeenth century until the late nineteenth and was a bitter one, creating a deep division both in the Orthodox Church as such and specifically in monastic life. It went to the extent that in monasteries such as Waldebba, where there were monks belonging to different tendencies, they did not want to celebrate the Eucharist together. Emperor Yohannes IV settled the dispute in 1878 by forcibly imposing the thesis of qarra, which adopted the name of tewahedo (union).

Both the monastery and the church that can be visited today in St. Stephen of Hayk are of relatively recent construction and offer no particular interest. Most worthy of note in the monastery is its museum, which exhibits a series of pieces that are not easy to find elsewhere. The most notable is a manuscript of the Book of the Gospels written between 1280 and 1281, which is considered the oldest manuscript existing today in Ethiopia. There is also a large stone cross attributed to Iyasus Mo’a and another stone that is said to be an altar where the pagans used to make sacrifices before being converted to Christianity by the holy founder. The museum also exhibits a huge wooden container used to prepare the ingera (local bread) and other kitchen utensils, all coming from the thirteenth century.
[Fr. Juan Gonzáles Núñez - Comboni Missionaries]